The first season of the American animated television series Gravity Falls consisted of 20 episodes on the Disney Channel, and aired from June 15, 2012 to August 2, 2013. 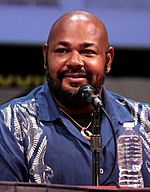 This season employs the likes of voice acting veteran Kevin Michael Richardson (left), who voices the character Sheriff Blubs, and has guest starred well-known figures, such as Larry King (right)

The main characters comprises the voices of Jason Ritter as Dipper and Kristen Schaal as Mabel, with series creator Alex Hirsch portraying Grunkle Stan and Soos, and Wendy Corduroy played by Linda Cardellini. Hirsch stated in an interview, tongue-in-cheek, on the role of Mabel that he "knew from the get-go that it's got to be [Schaal] or there's no show. I would've just stopped working. If we hadn't gotten her, I would have probably quit".

The series commissions various guest stars to voice characters who portray one-shot characters, or in some cases, cameos of themselves, as is the case in "Headhunters", where both Larry King and Coolio can be seen as wax sculptures of themselves. Other voices include John Oliver, who plays a wax figure of Sherlock Holmes (also featured in "Headhunters"), Alfred Molina as Multi-Bear and Jennifer Coolidge as Lazy Suzan in the episode "Dipper vs. Manliness". Justin Roiland plays a time traveler by the name of Blendin Blandin in "The Time Traveler's Pig". Brian Bloom is the voice of Rumble McSkirmish, a video game character featured in the episode "Fight Fighters". Corey Burton voices an unnamed lawyer in "Little Dipper". Jeff Bennett plays the role of The Summerween Trickster in the episode "Summerween". Matt Chapman and Michael Rianda both voice Mermando and Mr. Poolcheck respectively, in the episode "The Deep End". Lance Bass voices the band consisting of clones, Sev'ral Timez, in the episode "Boyz Crazy"; Matt Chapman returns to voice some members of the band. Greg Cipes and John Roberts voice Craz and Xyler, characters from the fictional film "Dream Boy High" in the episode "Dreamscaperers".

Internationally this was broadcast in Canada via Disney XD (Canada) with some numbering alterations reflecting the production codes: Headhunters (as Head Hunters) is counted 2 instead of 3 and The Inconveniencing is counted 3 instead of 5.

All content from Kiddle encyclopedia articles (including the article images and facts) can be freely used under Attribution-ShareAlike license, unless stated otherwise. Cite this article:
Gravity Falls (season 1) Facts for Kids. Kiddle Encyclopedia.