The Great Dog Island, also known as Big Dog Island, and part of the Great Dog Group within the Furneaux Group, is a 354-hectare (870-acre) granite island, located in Bass Strait, lying south of the Flinders Island and north of the Cape Barren Island, in Tasmania, in south-eastern Australia.

The island is private property and has been severely affected by grazing livestock, fire, muttonbirding and the introduction of exotic animals. The island is part of the Franklin Sound Islands Important Bird Area, identified as such by BirdLife International because it holds over 1% of the world populations of six bird species. 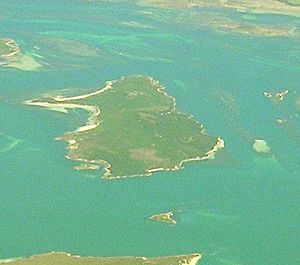 Great Dog Island viewed from the air, from the east

The island’s vegetation is dominated by the grass Poa poiformis, aided by the burrowing and fertilising activities of the shearwaters in conjunction with regular burning-off. However, at the north-eastern side of the island, there is a remnant mixed forest community, rare within the Furneaux Group, of manna gum and Acacia verticillata with various species of Allocasuarina, Melaleuca and Leptospermum.

All content from Kiddle encyclopedia articles (including the article images and facts) can be freely used under Attribution-ShareAlike license, unless stated otherwise. Cite this article:
Great Dog Island (Tasmania) Facts for Kids. Kiddle Encyclopedia.