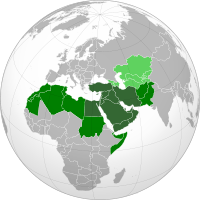 The Greater Middle East (also known as "The New Middle East") is a political term coined by the Bush administration to group together various countries, related to the Arab world and Iran, marginal countries such as Pakistan and Kashmir. Various Central Asian countries and the lower Caucasus (Azerbaijan, Armenia, and Georgia) and Cyprus,Turkey, and Greece are sometimes also included. Some speakers may use the term to denote areas with significant Muslim majorities, but this usage is not universal. The countries and Territories of the GME are as the following:

All content from Kiddle encyclopedia articles (including the article images and facts) can be freely used under Attribution-ShareAlike license, unless stated otherwise. Cite this article:
Greater Middle East Facts for Kids. Kiddle Encyclopedia.