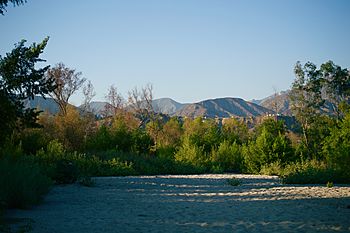 The band of Tongva people living in the Verdugo Mountains area, that both settlement locations are within, were named the Hahamog-na and Hahamongna by some Spanish-Mexican eras 'neighbors' and later Euro-American immigrants and historians. The two settlements sharing the 'same sounding' name, with different spellings given by non-native people, may stem from the band inhabiting both places. Research with present-day Tongva-Gabrieleño people, historical researchers and ethnologists, and supported by citations is needed.

All content from Kiddle encyclopedia articles (including the article images and facts) can be freely used under Attribution-ShareAlike license, unless stated otherwise. Cite this article:
Hahamongna, California Facts for Kids. Kiddle Encyclopedia.