Hancock is a town in Addison County, Vermont, United States. The town was named for John Hancock. The population was 359 at the 2020 census. Hancock is home to the Middlebury College Snow Bowl and contains Middlebury Gap through the Green Mountains.

Hancock was one of thirteen Vermont towns isolated by flooding caused by Hurricane Irene in 2011.

Hancock is located in eastern Addison County, extending from the crest of the Green Mountains in the west to the valley of the White River in the east. The village of Hancock lies along the White River at the confluence of the Hancock Branch from Middlebury Gap. Vermont Route 100 leads north-south through the town, following the White River, leading north into Granville and Warren, and south into Rochester and Stockbridge. Vermont Route 125 leaves Route 100 in Hancock village and leads west, across Middlebury Gap (elevation 2,144 ft or 653 m) into Ripton and Middlebury. The Middlebury College Snow Bowl, a downhill ski area, is on the western side of Middlebury Gap. The Long Trail follows the crest of the Green Mountains in the western part of Hancock, crossing the summit of Worth Mountain (3,234 ft or 986 m) and reaching the summit of Boyce Mountain (3,323 ft or 1,013 m) a few feet north of the town boundary in Ripton. Texas Falls is a scenic waterfall on Hancock Branch that can be reached by road and has a Green Mountain National Forest recreation area nearby. 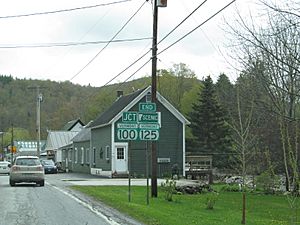 There were 164 households, out of which 27.4% had children under the age of 18 living with them, 54.9% were married couples living together, 7.3% had a female householder with no husband present, and 31.1% were non-families. 28.0% of all households were made up of individuals, and 10.4% had someone living alone who was 65 years of age or older. The average household size was 2.33 and the average family size was 2.77.

Hancock is home to Camp Killooleet, which adds roughly 150 people to the population every summer.

All content from Kiddle encyclopedia articles (including the article images and facts) can be freely used under Attribution-ShareAlike license, unless stated otherwise. Cite this article:
Hancock, Vermont Facts for Kids. Kiddle Encyclopedia.