Hanover is a town in Oxford County, Maine, United States. The population was 286 at the 2020 census. The town is a popular vacation and recreation area. 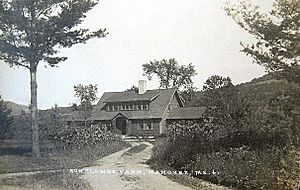 The area was first settled in 1774 by Nathaniel Segar from Newton, Massachusetts. Phineas Howard from Temple, New Hampshire purchased from Massachusetts in 1792 the unoccupied land in the township, including Howard Pond. The community became known as Howard's Gore. Combined with a portion of Bethel separated by the Androscoggin River, it then became Hanover, named by its German settlers for the House of Hanover. It was incorporated on February 14, 1843.

Endowed with fine loam soil, farming became an early business. Indeed, Hanover was known for having some of the best intervale farms in the state. A variety of crops were grown, the chief being hay. The outlet of Howard Pond provided water power for industry. At Hanover Village, 12 mills were established. They produced flour, woolens, furniture, short and long lumber, sash, blinds and doors, dowels and rakes. Other goods included leather, boots and shoes. By the early 1950s, however, the last mills had declined and closed. More recently, Hanover has become site for both year-round homes and vacation properties. However There is a house on Route 2 Heading towards Hanover That Is reported to be haunted. It is an old farm house That The Movie The Hanover House was filmed in. Owners have reported to see apparitions and orbs above the owners bed.

There were 116 households, of which 14.7% had children under the age of 18 living with them, 45.7% were married couples living together, 7.8% had a female householder with no husband present, 0.9% had a male householder with no wife present, and 45.7% were non-families. 34.5% of all households were made up of individuals, and 13.8% had someone living alone who was 65 years of age or older. The average household size was 2.05 and the average family size was 2.63.

All content from Kiddle encyclopedia articles (including the article images and facts) can be freely used under Attribution-ShareAlike license, unless stated otherwise. Cite this article:
Hanover, Maine Facts for Kids. Kiddle Encyclopedia.