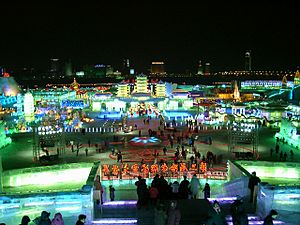 The Harbin International Ice and Snow Festival (or simply Harbin Ice Festival) is a festival held every year in Harbin, China. It involves ice sculptures and winter activities. Officially, the festival starts on 5 January and lasts one month. The festival has been held since 1963. It started as a local traditional ice lantern show and garden party during Chinese Spring Festival.

The festival was stopped for a number of years during the Cultural Revolution. It was resumed on 5 January 1985, when the Harbin city government hosted it at Zhaolin Park. It was then announced as an annual event. In 2001, the festival was merged with Heilongjiang International Ski Festival and got its current formal name. The Harbin Ice Festival is one of the world's top ice and snow festivals. It attracts a growing number of visitors from around the world.

Things to see and do

The festival has a series of shows at theme parks and ice activities on the Songhua River.

All content from Kiddle encyclopedia articles (including the article images and facts) can be freely used under Attribution-ShareAlike license, unless stated otherwise. Cite this article:
Harbin International Snow and Ice Festival Facts for Kids. Kiddle Encyclopedia.