Hedera helix (common ivy, English ivy, European ivy, or just ivy) is a species of flowering plant in the family Araliaceae, native to most of Europe and western Asia. A rampant, clinging evergreen vine, it is a familiar sight in gardens, waste spaces, on house walls, tree trunks and in wild areas across its native habitat. It is labeled as an invasive species in a number of areas where it has been introduced. 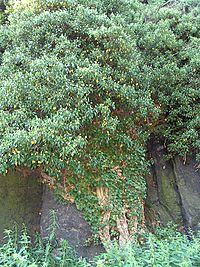 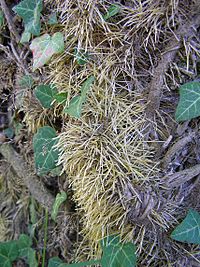 Stems showing the rootlets used to cling to walls and tree trunks.

Hedera helix is an evergreen climbing plant, growing to 20–30 m (66–98 ft) high where suitable surfaces (trees, cliffs, walls) are available, and also growing as groundcover where there are no vertical surfaces. It climbs by means of aerial rootlets with matted pads which cling strongly to the substrate.

The leaves are alternate, 50–100 mm long, with a 15–20 mm petiole; they are of two types, with palmately five-lobed juvenile leaves on creeping and climbing stems, and unlobed cordate adult leaves on fertile flowering stems exposed to full sun, usually high in the crowns of trees or the top of rock faces.
The flowers are produced from late summer until late autumn, individually small, in 3–5 cm diameter umbels, greenish-yellow, and very rich in nectar, an important late autumn food source for bees and other insects.
The fruit are purple-black to orange-yellow berries 6–8 mm diameter, ripening in late winter, and are an important food for many birds, though somewhat poisonous to humans.

There are one to five seeds in each berry, which are dispersed by birds eating the berries.

The closely related species Hedera canariensis and Hedera hibernica are also often treated as subspecies of H. helix, though they differ in chromosome number so do not hybridise readily. H. helix can be best distinguished by the shape and colour of its leaf trichomes, usually smaller and slightly more deeply lobed leaves and somewhat less vigorous growth, though identification is often not easy. 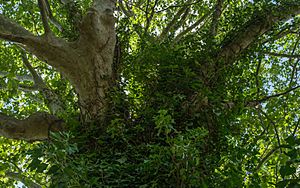 Common ivy clinging on a London plane tree in Agde

It ranges from Ireland northeast to southern Scandinavia, south to Portugal, and east to Ukraine and Iran and northern Turkey.
The northern and eastern limits are at about the −2°C winter isotherm, while to the west and southwest, it is replaced by other species of ivy. 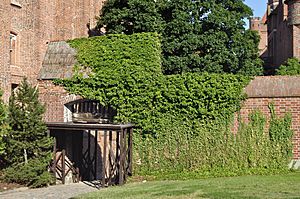 It is widely cultivated as an ornamental plant. Within its native range, the species is greatly valued for attracting wildlife. The flowers are visited by over 70 species of nectar-feeding insects, and the berries eaten by at least 16 species of birds. The foliage provides dense evergreen shelter, and is also browsed by deer.

The species can become a nuisance in gardens, rapidly colonising hedges, trees and borders if not kept in check. It can even invade neglected lawns. Over 30 cultivars have been selected for such traits as yellow, white, variegated (e.g. 'Glacier'), and/or deeply lobed leaves (e.g. 'Sagittifolia'), purple stems, and slow, dwarfed growth.

The following cultivars have gained the Royal Horticultural Society's Award of Garden Merit:-

In the past, the leaves and berries were taken orally as an expectorant to treat cough and bronchitis. In 1597, the British herbalist John Gerard recommended water infused with ivy leaves as a wash for sore or watering eyes. The leaves can cause severe contact dermatitis in some people. People who have this allergy (strictly a Type IV hypersensitivity) are also likely to react to carrots and other members of the Apiaceae as they contain the same allergen, falcarinol.

Like other exotic species, Ivy has predominantly been spread to areas by human action. H. helix is labeled as an invasive species in many parts of the United States, and its sale or import is banned in the state of Oregon.

Laurus nobilis and Ilex aquifolium are widespread relicts of the laurisilva forests that originally covered much of the Mediterranean Basin when the climate of the region was more humid during the tertiary era. Having disappeared during the glaciation, Ivy is believed to have been spread back across the continent by birds once the continent warmed up again. With a great capacity for adaptation, Ivy will grow wherever development conditions and habitat similar to that of its European origins exist, occurring as opportunistic species across a wide distribution with close vicariant relatives and few species, indicating recent speciation. 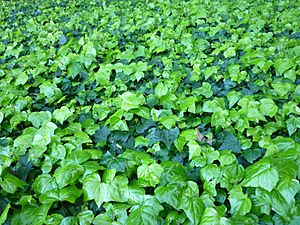 It is considered a noxious weed across southern, particularly south-eastern, Australia and local councils provide free information and limited services for removal. In some councils it is illegal to sell the plant. It is a weed in the Australian state of Victoria.

H. helix has been listed as an "environmental weed" by the Department of Conservation since 1990.

In the United States, H. helix is considered weedy or invasive in a number of regions and is on the official noxious weed lists in Oregon and Washington. Like other invasive vines such as kudzu, H. helix can grow to choke out other plants and create "ivy deserts". State- and county-sponsored efforts are encouraging the destruction of ivy in forests of the Pacific Northwest and the Southern United States. Its sale or import is banned in Oregon. Ivy can easily escape from cultivated gardens and invade nearby parks, forests and other natural areas.

English Ivy should not be planted or encouraged in areas where it is invasive. Where it is established, it is very difficult to control or eradicate. In the absence of active and ongoing measures to control its growth, it will tend to crowd out all other plants, including shrubs and trees.

Ivy can climb into the canopy of young or small trees in such density that the trees fall over from the weight, a problem which does not normally occur in its native range. However, this is not the primary mechanism by which ivy kills large trees. Ivy kills mature and well-established trees primarily by girdling, and by water and nutrient competition. This can be seen in the inexorable death of mature trees that are not bent by the weight of the ivy on their trunks. Ivy grows in a dense mat on the trunk and around the base of trees, creating buildup of organic matter and habitat for bark-damaging organisms. Ground-running stems of ivy can wrap tightly around the base of the tree, constricting the tree as it grows and cutting into the phloem. For this reason, it is especially important to remove ivy not only from the trunk of trees, but also from the ground at their base, creating "survival rings". In its mature form, dense ivy can destroy habitat for native wildlife and creates large sections of solid ivy where no other plants can develop.

Ivy covering the walls of an old building is a familiar and often attractive sight. It may have insulating benefits, but can be problematic if not managed correctly. Ivy, and especially European ivy (H. helix) grows extremely rapidly and clings by means of fibrous roots which develop along the entire length of the stems. These are difficult to remove, leaving an unsightly "footprint" on walls, and possibly resulting in expensive resurfacing work. Additionally, ivy can quickly invade gutters and roof spaces, lifting tiles and causing blockages. It also harbors mice and other unwelcome creatures. The plants have to be cut off at the base, and the stumps dug out or killed to prevent regrowth.

All content from Kiddle encyclopedia articles (including the article images and facts) can be freely used under Attribution-ShareAlike license, unless stated otherwise. Cite this article:
Common ivy Facts for Kids. Kiddle Encyclopedia.