Heworth is part of the city of York in North Yorkshire, England, about 1 mile (1.6 km) north-east of the centre. It is sometimes referred to as Heworth Village. The name "Heworth" is Anglo-Saxon and means a "high enclosure". 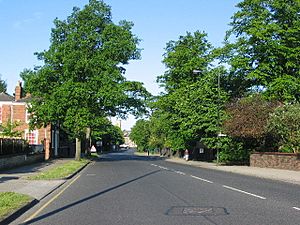 View down Heworth Green towards York

Housing in Heworth varies from terraced houses along East Parade towards Layerthorpe, through large Victorian villas on Heworth Green, to older houses in Heworth village and the 1830s Elmfield Villa, home to Elmfield College and 1930s semi-detached houses on Stockton Lane.

Heworth has seen lots of modern suburban development, particularly in the outlying area of Heworth Without.

In recent years there has been an increasing tendency for estate agents to describe properties in the less desirable areas of Layerthorpe, Burnholme and Tang Hall as being in the more desirable Heworth causing some confusion about the extent of the area.

A number of bus routes serve the settlement.

Very little is known about the prehistoric history of the Heworth area, some researchers believe the area was largely boggy land. The village is of Roman origin and two Roman cremation cemeteries have been found in the area. Heworth Green, the road from York city centre to the village, is on the site of a Roman road.

During the early Medieval period, contemporary burials took place in a similar area to the Roman ones; this was during the 5th and 6th centuries. However, evidence for settlement in Heworth during this period of time still remains minimal.

The village appears as Heworde in the Domesday Book, and as Hewud in 1219.

On 24 August 1453, a skirmish took place and was the first meeting of the two families involved in the Percy-Neville feud, the feud which eventually helped provoke the Wars of the Roses. Historians have described an attack on the Neville family's wedding party by Lord Egremont; numerous contemporaries regard it as the very first military action of the Wars of the Roses.

The Neville family was returning to Sheriff Hutton castle following a wedding between Sir Thomas Neville and Maud Stanhope. Stanhope was the heiress and niece of Ralph de Cromwell. Cromwell had previously confiscated Percy strongholds such as Wressle and Bunwell after Henry 'Hotspur' Percy's death in 1403; the thought of those properties one day being handed over to the Neville family angered Lord Egremont greatly.

Egremont decided to ambush the Neville family's returning wedding party at Heworth Moor, along with 1,000 retainers from York. The Neville family were said to have given a good account of themselves and defended themselves well in the skirmish.

During the summer of 1642 both the Parliamentary party and King Charles I negotiated with each other while preparing for war.

When Charles endeavoured to raise a guard for his own person at York, intending it, as the event afterwards proved, to form the nucleus of an army, Lord Fairfax was required by Parliament to present a petition to his sovereign, entreating Charles to hearken to the voice of his Parliament, and to discontinue the raising of troops. This was at a great meeting of the freeholders and farmers of Yorkshire convened by the king on Heworth Moor on 3 June near York. Charles evaded receiving the petition, pressing his horse forward, but Thomas Fairfax followed him and placed the petition on the pommel of the king's saddle.

The lands called Monk Ward Stray consist of 131 acres and 38 perches of land, situate near York, and in the township of Heworth. Before the passing of an Enclosure Act 1817, the freemen of York, who were occupiers of houses within a division or ward of the city, called Monk Ward, were, together with certain other persons, entitled to common of pasture and right of stray or average, and had immemorially used and enjoyed the same, in and over a parcel of ground called Heworth Moor, of which G. A. Thweng, lord of the manor of Heworth, was then seised in fee; another piece of land, called Heworth Grange, of which the king was then seised in fee; and certain closes and other parcels of ground, called Hall Fields, of which E. Prest and others were then seised in fee.

Construction of the Heworth Green Villas on Heworth Road began about 1817. Until the mid-19th century, the Lord of the Manor was the Reverend Robert William Bilton Hornby. The Ordnance Survey map of 1849, shows that Heworth was effectively a square of three parallel streets sandwiched between the then Scarborough Road and East Parade.

On the outskirts of the village near Monk Stray was Elmfield College, a Primitive Methodist foundation which existed from 1864 to 1932, when it merged with Ashville College in Harrogate. All that is left of the college now is numbers 1 and 9 Straylands Grove, next to Monk Stray, and staff housing along Elmfield Terrace and Willow Grove.

The church of Holy Trinity (architect: George Fowler Jones) was added in 1869; outlying features included a Wesleyan Chapel, the manor house, a public house (The Britannia), a windmill, several potteries, Heworth Hall and Heworth House. At that time Tang Hall was just that – a hall situated in parkland; since then it has developed into its own neighbourhood. Christ Church was built on Stockton Lane in 1964. Heworth became a Conservation Area in 1975.

All content from Kiddle encyclopedia articles (including the article images and facts) can be freely used under Attribution-ShareAlike license, unless stated otherwise. Cite this article:
Heworth, York Facts for Kids. Kiddle Encyclopedia.