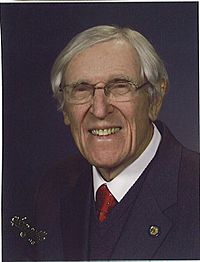 John Hall Buchanan Jr. (March 19, 1928 – March 5, 2018) was an American politician. He was a member of the Republican Party. He was born in Paris, Tennessee. He served in the United States House of Representatives from Alabama's 6th congressional district from 1965 through 1981.

Buchanan Jr. died of complications from dementia in Bethesda, Maryland on March 5, 2018 at the age of 89.

All content from Kiddle encyclopedia articles (including the article images and facts) can be freely used under Attribution-ShareAlike license, unless stated otherwise. Cite this article:
John Hall Buchanan Jr. Facts for Kids. Kiddle Encyclopedia.