Juan Ponce Enrile Sr. (born February 14, 1924) is a Filipino politician and lawyer. He was a protégé of President Ferdinand Marcos, and served as Justice Secretary and then Defense Minister under the Marcos regime.

He later became one of the leaders (along with General Fidel V. Ramos) of the 1986 People Power Revolution that drove Marcos from power and into exile. Enrile has continued to be a prominent politician since then; he was Senate President from November 2008 until his resignation on June 5, 2013. 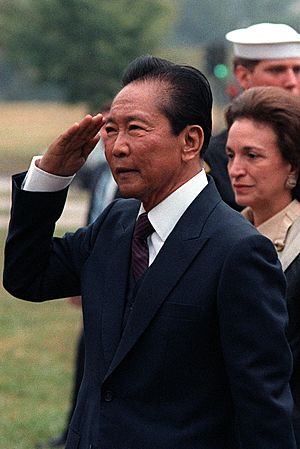 Juan Ponce Enrile was a protégé of Ferdinand Marcos

He scored 11th in the 1953 bar examinations and a perfect score in mercantile law. As a scholar at the Harvard Law School, he earned a Master of Laws degree with specialized training in international tax law.

He taught law at the Far Eastern University and practiced law in his father's law firm before taking responsibility for then Senator Ferdinand Marcos's personal legal affairs in 1964. After Marcos was elected president in 1965, Enrile became part of his inner circle. From 1966 to 1968, he was the Undersecretary and sometime Acting Secretary of the Department of Finance. He concurrently became acting Insurance Commissioner and Commissioner of the Bureau of Customs. From 1968 to 1970, he was the Secretary of Justice.

Enrile, or "Manong Johnny" as he is often called (manong is an Ilocano term of endearment for an older brother), is married to Cristina Castañer, a Spaniard, who has served as the Philippine Ambassador to the Holy See. They have two children, his son is currently congressman for the 1st District of Cagayan and running for a Senate seat under UNA, while his daughter is currently CEO of Enrile's company Jaka Group, which owns the Philippine Match Company. Enrile has a half-sister, Armida Siguion-Reyna, who is a singer as well as a theatre and film actress.

All content from Kiddle encyclopedia articles (including the article images and facts) can be freely used under Attribution-ShareAlike license, unless stated otherwise. Cite this article:
Juan Ponce Enrile Facts for Kids. Kiddle Encyclopedia.