Kehrsatz is a municipality in the Bern-Mittelland administrative district in the canton of Bern in Switzerland. 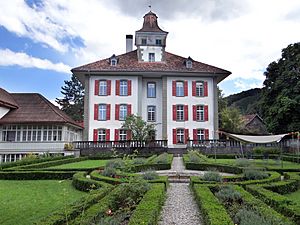 Kehrsatz is first mentioned in 1281 as Kersaz. In 1388, the village became part of the Bernese district of Seftigen. Kehrsatz Castle was built in the 14th century. It was rebuilt in the 16th century and renovated several times since then. Over the centuries, a number of Bernese patrician families ruled over Kehrsatz. This all changed following the 1798 French invasion, and creation of the Helvetic Republic. Kehrsatz became an independent municipality in the Canton of Bern. The Canton acquired the Castle and in 1888 turned it into a girls boarding school. Today it is a Cantonal boarding school.

In the late 19th and early 20th century, a new highway and the Gürbetal-Bern-Schwarzenburg railroad tied Kehrsatz closely with Bern. In the 1960s Bern grew rapidly and Kehrsatz became a suburb and part of the agglomeration of Bern. In 1969, a primary and secondary school opened in Selhofen for the growing population.

All content from Kiddle encyclopedia articles (including the article images and facts) can be freely used under Attribution-ShareAlike license, unless stated otherwise. Cite this article:
Kehrsatz Facts for Kids. Kiddle Encyclopedia.