Köniz is a statistical town, however considers itself still as a village, and a municipality in the Bern-Mittelland administrative district right on the southern border to Bern in the canton of Bern in Switzerland.

The municipality of Köniz as a single settlement would belong to the 15 most populous towns in Switzerland. It is also part of the larger Bern of about 400,000 inhabitants.

The official language of Köniz is (the Swiss variety of Standard) German, but the main spoken language is the local variant of the Alemannic Swiss German dialect.

The current municipality has long been inhabited; there have been a number of Bronze- and Iron Age finds, as well as Roman villas (villae rusticae) and Early Middle Ages graveyards.

The oldest parts of the current reformed parish church (formerly. St. Peter and Paul) date back to around 1100. There may have been other previous buildings on this site, but archaeological digs have uncovered no evidence of them thus far.

According to legend the church was founded by Burgundian King Rudolph II and his wife Bertha. The parish did not only comprise the current municipality, but also the area around present day Bern, around 5 km away.

In 1191 it became the parish church of the newly founded town, until it was given the status of its own parish in 1276.

There was an Augustinian monastery at the church, which was given to the Teutonic Knights by King Heinrich VII, the son and heir to the Holy Roman Emperor Friedrich II, in 1226. 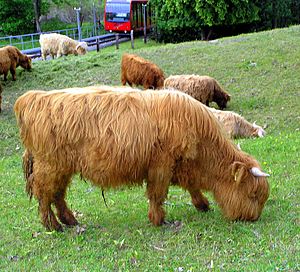 Out of the forested land, 29.5% of the total land area is heavily forested and 1.4% is covered with orchards or small clusters of trees. Of the agricultural land, 31.2% is used for growing crops and 18.0% is pastures, while 1.4% is used for orchards or vine crops.

All the water in the municipality is flowing water.

All content from Kiddle encyclopedia articles (including the article images and facts) can be freely used under Attribution-ShareAlike license, unless stated otherwise. Cite this article:
Köniz Facts for Kids. Kiddle Encyclopedia.