Kendall is a town in Orleans County, New York, United States. The population was 2,724 at the 2010 census. The Town of Kendall is in the northeast corner of the county and is northwest of Rochester.

The town was part of the Connecticut Tract, also called the 100,000 Acre Tract.

The first settlers arrived circa 1812. The Erie Canal opened in 1825, making a ready market for wheat and lumber. It also made the way easier for more settlement. The first Norwegian immigrant community in the United States was begun at the Kendall Settlement in 1825. They settled in a body along the lakeshore in the northeast part of town. Norwegian-American pioneer leader Cleng Peerson subsequently founded a settlement in the Fox River Valley of Illinois during 1834, near the community of Norway, Illinois.

The Town of Kendall was incorporated from the Town of Murray. On April 7, 1837, about half of the Town of Murray became the new Town of Kendall. It was formerly called "North Murray" and was settled slowly due to swampy terrain, being called the "Black North," due to the bogs and forests. The town was named after Amos Kendall, the U.S. Postmaster General under Presidents Andrew Jackson and Martin Van Buren.

There were 979 households out of which 37.5% had children under the age of 18 living with them, 68.1% were married couples living together, 8.2% had a female householder with no husband present, and 18.8% were non-families. 14.6% of all households were made up of individuals and 5.6% had someone living alone who was 65 years of age or older. The average household size was 2.90 and the average family size was 3.18.

Communities and locations in Kendall 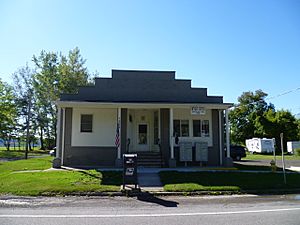 The post office for Morton, NY, which is located on County Line Road.

All content from Kiddle encyclopedia articles (including the article images and facts) can be freely used under Attribution-ShareAlike license, unless stated otherwise. Cite this article:
Kendall, New York Facts for Kids. Kiddle Encyclopedia.