Kidsgrove is a town in the borough of Newcastle-under-Lyme, Staffordshire, England, near the Cheshire border. It is part of the Potteries Urban Area in North Staffordshire, along with Stoke-on-Trent and Newcastle-under-Lyme. It has a population of 24,112 (2001 census), decreasing to 23,756 at the 2011 Census. Most of the town is in the Kidsgrove ward, whilst the western part is in Ravenscliffe.

From the 18th century, Kidsgrove grew around coal mining, although the pits have now closed. Clough Hall Mansion in the town is now demolished.

The engineer James Brindley cut the first Harecastle Tunnel on the Trent and Mersey Canal near the town; Thomas Telford cut the second. Kidsgrove also marks the southern extremity of the Macclesfield Canal. There is a legend regarding a headless ghost that is said to haunt the Harecastle Tunnel. The ghost is said to be that of a young woman who was murdered inside the tunnel. She is referred to as the "Kidsgrove Boggart".

Kidsgrove was made an urban district in 1904 with the abolition of the Wolstanton Rural District, including the parishes of Kidsgrove and Newchapel. Talke, previously part of the Audley Urban District, was added in 1932. [1]

Kidsgrove is served by Kidsgrove railway station which was opened by the North Staffordshire Railway on 9 October 1848 as Harecastle, later becoming Kidsgrove Central. This railway station is still open as a junction (now Kidsgrove). However, there were two other stations on the closed loop line namely Kidsgrove Liverpool Road, opened 15 November 1875 and Market Street Halt, opened 1 July 1909.

The town has a library, post office, health centre, bank and supermarket. Market Street has smaller shops, restaurants. Schools include The King's Church of England School.

The First Potteries Bus Route numbers 7/7A, 3 and 4A buses each have terminuses in Kidsgrove, and the railway connects Kidsgrove railway station with Crewe, Manchester and Stoke-on-Trent. The Trent and Mersey Canal runs through the town. Kidsgrove is also home to a portion of the A50 road and is very close to the A50 and the A500.

Kidsgrove is home to the First Kidsgrove Scout Group in the district of Potteries North. After having two fires at their original location, Kidgrove Scouts moved to their current location on the Avenue. Recently there has been another fire at this building but only the small back building was lost, along with some of their Archery and Air-Rifle shooting equipment. 1st Kidsgrove Scouts also has a multiple contest winning drum corps known as the Kidsgrove Scouts Drum & Bugle Corps who are the 6 time British Drum Corps Champions and have competed in DCA and DCE competitions. Winning DCE in 2010 to become European champions.

Founded on 15 January 1969 and presented with its charter on 2 July the same year, the Rotary Club of Kidsgrove (RCK) has been active within the community whether fundraising, volunteering or helping out local projects for over 40 years. The club is also part of District 1210 within Rotary International in Britain and Ireland.

Originally meeting in the Masonic Hall and Institute in the town, the group now gets together at the Bleeding Wolf, Scholar Green. 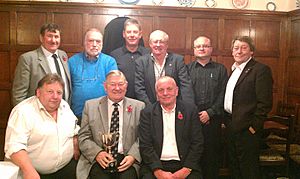 During November RCK hold a bonfire night and fireworks at Clough Hall Park and during December they can be seen on the streets of Kidsgrove with their Santa float, collecting for local good causes.

In April 2012 RCK were also announced as the Rotary International in Britain and Ireland winners of the Club Online Presence Award. This was the first time the award has been presented and recognises the achievements the group have made through their website and a variety of social media avenues in the year.

All content from Kiddle encyclopedia articles (including the article images and facts) can be freely used under Attribution-ShareAlike license, unless stated otherwise. Cite this article:
Kidsgrove Facts for Kids. Kiddle Encyclopedia.