View of Killarney from the west 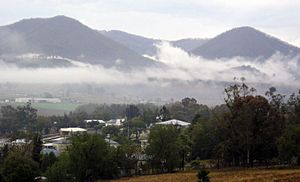 Killarney is a rural town and locality in the Southern Downs Region, Queensland, Australia. It borders New South Wales. In the 2016 census, the locality of Killarney had a population of 954 people.

Originally part of Canning Downs, established by the Leslie brothers in 1840, the development of the town was largely based on primary production and forestry.

The South Killarney town site was first surveyed in 1878, but the town already boasted several shops and services by this time. Many early settlers to Queensland selected land in the Killarney area with the first of these arriving in 1863. During the 1880s Killarney was described as "one of the most flourishing towns in Southern Queensland".

The town was hit by a destructive tornado on Saturday 23 November 1968, which destroyed many of the original buildings. The main street buildings that survived the storm: the Butter Factory, the Co-op Building, MacKenzie’s Emporium (now a St Vincent de Paul boutique), former Commercial Bank (opposite the Post Office), the Post Office and the Killarney Hotel, hint at the town's former glory. The former National bank building did survive the storm but was relocated to a suburb of Brisbane in 1977. The old Bank Vault foundation stones remain on the vacant block in the buildings original location adjacent to the St Vincent de Paul boutique. November 2008 marks the 40th anniversary of this storm.

The Killarney Co-operative is Killarney's main street under one roof. Partially operating in the original Milward's General Store, originally established in 1913 as the Killarney Dairy Company, the Co-operative was formed in 1922 and remains community owned. In 2008, the "Co-op" was a department store boasting in-store banking, gifts, shoes, electrical, hardware, garden, agricultural supplies, supermarket, delicatessen and coffee shop.

The Killarney Recreation Club has been a recent addition to the townscape on the southern side of town, built with funds raised by the local community. Two sandstone horseheads at the entrance to the Polocrosse Fields and the "God of Sport Statue" in front of the Club were created by locally based sculptor Paul Stumkat. 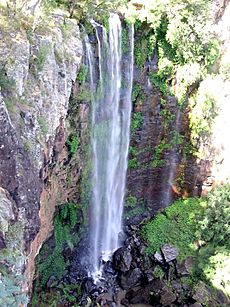 Queen Mary Falls are a short distance from Killarney

The five waterfalls surrounding Killarney make this area a popular scenic destination, the Teviot Falls, Queen Mary Falls, Dagg's Falls, Brown's Falls and Upper Brown's Falls. During wet weather there are two additional falls, Black Fella Falls and Jack Brunton's Falls, which can be seen tumbling down the cliffs surrounding Killarney at the bottom of the Cambanoora Gorge.

Killarney has a cool subtropical climate, like most of inland south-east Queensland. Winters can be cold and frosty, while summers are warm but rarely hot.

Water to the town is supplied from a small weir on Spring Creek. In April 2007, the Courier Mail newspaper reported that the town might have to be evacuated due to water shortages caused by years of extreme drought. In January 2008 the Condamine River broke its banks after a week of steady rain and buildings in the main street were flooded. Since that time Killarney has returned to the verdant green hills local long term residents find more familiar.

The local economy is underpinned by agriculture, abattoirs (which was closed in February 2011), transport and more recently tourism.

All content from Kiddle encyclopedia articles (including the article images and facts) can be freely used under Attribution-ShareAlike license, unless stated otherwise. Cite this article:
Killarney, Queensland Facts for Kids. Kiddle Encyclopedia.