Kids Encyclopedia Facts
Not to be confused with Kinwood, an unincorporated town in Harris County, Texas.

Kingwood is a 14,000 acre (57 km²) master-planned community located in northeast Houston, Texas, United States. The majority of the community is located in Harris County with a small portion in Montgomery County. Known as the "Livable Forest," it is the largest master-planned community in Harris County and second-largest within the 10-county Houston-The Woodlands-Sugar Land metropolitan area. It was classified as a "census-designated place" during the 1990 census, when the population recorded was 37,397. It is on the east fork of the San Jacinto River.

Kingwood was created in 1971 as a joint venture between the Friendswood Development Company and King Ranch. Its name was derived as part of that partnership.

The Foster Lumber Company originally owned a portion of the tract of land that was later developed into the community of Kingwood. The Foster Family had owned the land since around 1892. On December 28, 1967, the land was sold to the joint venture between King Ranch and the Friendswood Development Company, an Exxon subsidiary. Exxon's Friendswood Development Company hired John Bruton Jr. to serve as the Operations Manager in which he was responsible for the planning, development, engineering, and construction of Kingwood Plans for the community included greenbelts, shopping centers, schools, churches, recreational facilities, riding and hiking trails, and a boat ramp with access to Lake Houston.

The City of Houston annexed portions of what would become Kingwood in the 1960s, but it dis-annexed those portions by the late 1970s, making them unincorporated.

In 1994, the City of Houston began the process to annex Kingwood. According to Texas state law, a home-rule city may annex an unincorporated area, without the consent of the residents, if the area is within the city's extraterritorial jurisdiction. Bob Lanier, then the Mayor of Houston, believed that the annexation of Kingwood would result in a $4 million annual gain for the City of Houston. Lanier argued that the city needed to bring in Kingwood to add more to its tax base. On Wednesday August 21, 1996, the Houston City Council asked the Planning and Development Department to create service plans for Kingwood and Jacintoport, another area being annexed by Houston. The annexation of Kingwood and Jacintoport increased the city's population by about 43,000 people. The annexation meant that areas de-annexed by the city in the 1970s were being re-annexed.

Renée C. Lee of the Houston Chronicle said that Kingwood residents "fought an uphill battle [against annexation] for two years." Kingwood residents offered to pay $4 million to the city in exchange for not being annexed. The residents also filed a federal lawsuit against the City of Houston, claiming that the city was taxing residents without representation. At the time, many residents believed that the City of Houston would not follow through on the state law requirement asking annexing cities to provide equal services to the annexed areas as they do to their original territory. Some residents did not like the idea of the city annexing their community without the community's consent.

Houston annexed Kingwood in 1996, adding about 15,000 acres (6,100 ha) to the city limits. During that year, Thomas Phillips, a retired longshoreman and Bordersville resident, joined with representatives of Kingwood and sued the City of Houston in federal court arguing that the city could not legally annex areas if it did not provide certain services to some of its existing areas, including Bordersville which never had city water. Imad F. Abdullah, the President of Landmark Architects Inc., criticized the residents who fought annexation in his 1996 editorial in the Houston Business Journal, arguing that a "not in my backyard" mentality in particular communities overall negatively affects the entire metropolitan area.

Kingwood lobbied the Texas Legislature, asking for modifications to the state's annexation laws. In 1999 the legislature successfully passed amendments requiring annexing municipalities to develop plans for services provided to communities being annexed, and municipalities are required to provide a three-year planning period prior to official annexation to allow for public comment. The modified law allows for communities to use arbitration if the annexing cities fail to follow through with their service plans. The amendments do not affect prior annexations, including Kingwood's annexation. Some Kingwood residents expressed satisfaction that other suburban unincorporated areas including The Woodlands would not undergo the annexation that occurred in Kingwood.

A 1999 series of robberies were perpetrated by four teenage girls from Kingwood. The film Sugar & Spice was loosely based on the incidents.

In 2006, Kingwood has over 65,000 residents. During that year, ten years after the annexation, Lee said that "[a]nger and resentment that colored the early days of annexation" never dissipated and that most Kingwood residents "have settled in as Houstonians, but who still opposed annexation." Lee said that while residents sometimes complain about high rates for sewer and water services and obvious inadequacies in the fire and EMS services, those residents believe that Kingwood "has greatly suffered from being a part of the city." Lee says that most residents "will never come to terms with Houston's hostile takeover." Lee said that "Services have deteriorated, and the community has lost its identity as a suburban haven as most people had feared" and "Many residents believe the community has not maintained its identity as the Livable Forest[.]"

Kingwood has two community newspapers, The Tribune Newspaper and The Kingwood Observer.

Kingwood is thirty miles northeast of Downtown Houston in the piney woods of southeastern Texas. It is divided into 25 neighborhoods, called "villages". Most villages have a neighborhood pool providing free access for village residents, and most provide their own set of village-specific services. During the summer, many of the villages organize youth swimming teams affiliated with the Northwest Aquatic League (NWAL).

Trailwood is Kingwood's oldest subdivision, with its first homes being completed in 1971: while new homes are still being built in Barrington, Kingwood Greens, Kings River, Kings Point, and Royal Shores. 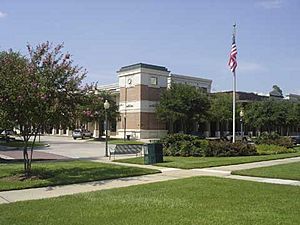 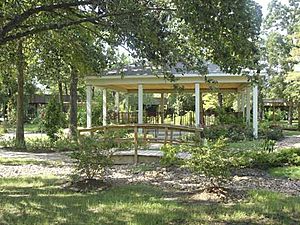 The People's Park in Kingwood

Kingwood has over 500 acres (200 ha) of nature preserves and parks, and it has over 75 miles (121 km) of hike and bicycle trails. The Kingwood community, not the city of Houston, owns the parks and trails.

The greenbelt trails' maintenance is the responsibility of the trail association in each village with the exception of Trailwood Village. Over 75 miles (121 km) of greenbelts comb the area. In addition, each village association maintains a park and swimming pool for the benefit of its residents.

The City of Houston operates the Dylan Duncan Memorial Park. It includes a picnic pavilion and a skate facility

Kingwood residents enjoy a number of community events throughout the year, including:

The human resources company Insperity (formerly Administaff) has its headquarters in Kingwood.

As of 1999, about 90% of children raised in Kingwood attended colleges and universities. 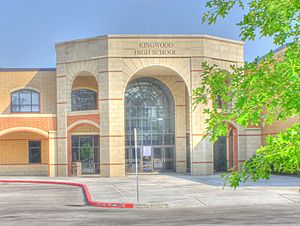 The 1996 annexation of Kingwood did not change school district boundaries nor did it change any attendance zones of individual public schools. 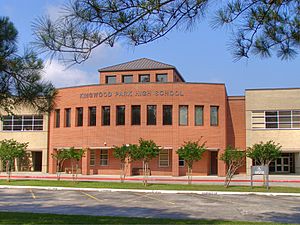 Holy Trinity Episcopal School, a Christian PK-5 school, is in Harris County, in proximity to Kingwood. The closest Catholic high school is Frassati Catholic High School in north Harris County; the planners of the school considered Kingwood to be in the area it serves. In addition St. Thomas High School, an all boys' high school in central Houston, has a bus service from and to St. Martha Catholic School.

Dedicated on August 12, 1983, the 12,000-square-foot (1,100 m2) original Kingwood Branch of the Harris County Public Library, had over 112,000 books. In partnership with the Houston Public Library, plans were made to replace the original branch with a new a "City-County" branch in exchange for 4.2 million dollars to fund the building of a new 35,000-square-foot (3,300 m2) facility. The original Kingwood Library location closed on March 13, 2010, and the new location opened on April 19, 2010. The demolished building was replaced by a new community center.

In addition to the Kingwood Library, and within Kingwood, there is also the Kingwood Community College library, which permits access for "currently enrolled students, high school students and adults living within the district, patrons of Montgomery County Memorial Library System, and college employees."

George Foreman, boxer, lived in Kingwood for many years and still owns a house in the Foster's Mill neighborhood.

All content from Kiddle encyclopedia articles (including the article images and facts) can be freely used under Attribution-ShareAlike license, unless stated otherwise. Cite this article:
Kingwood, Houston Facts for Kids. Kiddle Encyclopedia.