La Linea ("The Line") is an Italian animated series created by the Italian cartoonist Osvaldo Cavandoli. The series consists of 90 episodes, which were originally broadcast on the Italian channel RAI between 1971 and 1986. The background tune for the series was created by Franco Godi.

The series features a man known as "Mr. Linea" (voiced by Carlo Bonomi in a grammelot similar to the Milanese dialect) drawn as a single outline of an infinite line, which encounters various obstacles during his walking, and often turns to the cartoonist, represented as a live-action hand holding a pencil, to draw him a solution. All episodes are short subjects, ranging from 2:30 to 6:40 in runtime.

The series aired in more than 50 countries around the world; due to the short length of episodes, it have often been used in many networks as an interstitial program, including in the United States. Over the years, La Linea gained a widespread popularity worldwide, and it is considered to be a cult classic. It also spawned a comic strip, books, additional short movies, merchandising gadgets and objects, and countless homages and parodies, with many appearances of the protagonist in other media.

The cartoon features a man (known as "Mr. Linea") drawn as a single outline around his silhouette, walking on an infinite line of which he is a part. The character encounters obstacles and often turns to the cartoonist, represented as a live-action hand holding a white grease pencil, to draw him a solution, with various degrees of success. One recurring obstacle was an abrupt end of the line. The character would often almost fall off the edge into oblivion and get angry with the cartoonist and complain about it. 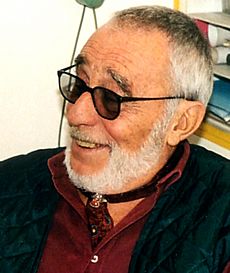 In 1969, Osvaldo Cavandoli proposed his character "Mr. Linea" to some advertising agencies that made films for Carosello. The character pleased the engineer Emilio Lagostina, art collector and owner of the pressure cooker industry Lagostina, who wanted him to be the protagonist of some commercials for his company.

The presentation of the character, initially called Agostino Lagostina (the name was later removed after the first series) was: "Who is Agostino? A lively little man, with a truly expressive nose, with all the concerns and concerns of modern life. Son of a pencil and a hand."

The character was voiced by Carlo Bonomi in a mock version of Milanese that resembled gibberish as much as possible, with occasional Italian or English words, giving the cartoon the possibility to be easily exported without dubbing. The voice resembles Pingu, which was also voiced by Bonomi. The background tune for the series was edited by Franco Godi and Corrado Tringali.

The first 8 episodes of the series were created to publicize Lagostina kitchenware products, and the accompanying narration identified Mr. Linea. After the series broke its association with Lagostina, the character became the protagonist of his own television series, which enjoyed huge success worldwide. Over 90 episodes were produced.

From 1972 on La Linea was shown on numerous TV stations in Europe as well as in cinema, mostly as interstitial between commercials. La Linea was shown in more than 50 countries over the world. The series won prizes 1972 in Annecy and 1973 in Zagreb.

Cavandoli also adapted his animated cartoon series into a comic strip, which won many international awards.

The show is known by different names around the world, including:

All content from Kiddle encyclopedia articles (including the article images and facts) can be freely used under Attribution-ShareAlike license, unless stated otherwise. Cite this article:
La Linea (TV series) Facts for Kids. Kiddle Encyclopedia.