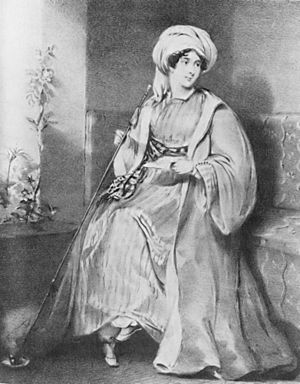 Lady Hester Lucy Stanhope (12 March 1776 – 23 June 1839) was a British aristocrat, adventurer, antiquarian, and one of the most famous travellers of her age. Her archaeological excavation of Ashkelon in 1815 is considered the first to use modern archaeological principles, and her use of a medieval Italian document is described as "one of the earliest uses of textual sources by field archaeologists". Her letters and memoirs made her famous as an explorer.

Lady Hester Lucy Stanhope was the eldest child of Charles Stanhope, 3rd Earl Stanhope, by his first wife, Lady Hester Pitt. She was born at her father's seat of Chevening and lived there until early in 1800, when she was sent to live with her grandmother, Hester Pitt, Countess of Chatham, at Burton Pynsent.

In August 1803, she moved into the home of her uncle, William Pitt the Younger, to manage his household and act as his hostess. In his position as British prime minister, Pitt, who was unmarried, needed help with political social life. Lady Hester sat at the head of his table and assisted in welcoming his guests; she became known for her beauty and conversational skills. When Pitt was out of the office she served as his private secretary. She was also the prime initiator of the gardens at Walmer Castle during his tenure as Lord Warden of the Cinque Ports. Britain awarded her an annual pension of £1200 after Pitt's death in January 1806. After living for some time at Montagu Square in London, she moved to Wales and then left Great Britain for good in February 1810 after the death of her brother. A romantic disappointment is said to have prompted her decision to go on a long sea voyage — Her niece (Wilhelmina Powlett, Duchess of Cleveland) suspected she and Lieutenant-General Sir John Moore might have considered marrying.

Among her entourage were her physician and later biographer Charles Lewis Meryon, her maid, Anne Fry, and Michael Bruce, an adventurer and later MP, who became her lover. It is claimed that when they arrived in Athens, the poet, Lord Byron, dived into the sea to greet her. Byron later described her as "that dangerous thing, a female wit", and remarked that she had "a great disregard of received notion in her conversation as well as conduct". From Athens, Stanhope's party travelled on to Constantinople (present-day Istanbul), capital of the Ottoman Empire. They intended to proceed to Cairo, only recently emerged from the chaos following Napoleon's invasion of Egypt and the international conflicts that followed.

Journey to the Near and Middle East

En route to Cairo, the ship encountered a storm and was shipwrecked on Rhodes. With all their possessions gone, the party borrowed Turkish clothing. Stanhope refused to wear a veil, choosing the garb of a Turkish male: robe, turban and slippers. When a British frigate took them to Cairo, she continued to wear clothing which was extremely unorthodox for an English woman: she bought a purple velvet robe, embroidered trousers, waistcoat, jacket, saddle and sabre. In this costume she went to greet the Pasha. From Cairo she continued her travels in the Middle East. Over a period of two years she visited Gibraltar, Malta, the Ionian Islands, the Peloponnese, Athens, Constantinople, Rhodes, Egypt, Palestine, Lebanon and Syria. She refused to wear a veil even in Damascus. In Jerusalem, the Church of the Holy Sepulchre was cleared of visitors and reopened in her honour.

Learning from fortune-tellers that her destiny was to become the bride of a new messiah, she made matrimonial overtures to Ibn Saud, chief of the Wahhabis Arabs (later leader of the First Saudi State). She decided to visit the city of Palmyra, even though the route went through a desert with potentially hostile Bedouins. She dressed as a Bedouin and took with her a caravan of 22 camels to carry her baggage. Emir Mahannah el Fadel received her and she became known as "Queen Hester."

According to Charles Meryon, she came into possession of a medieval Italian manuscript copied from the records of a monastery somewhere in Syria. According to this document, a great treasure was hidden under the ruins of a mosque at the port city of Ashkelon which had been lying in ruins for 600 years. In 1815, on the strength of this map, she travelled to the ruins of Ashkelon on the Mediterranean coast north of Gaza, and persuaded the Ottoman authorities to allow her to excavate the site. The governor of Jaffa, Muhammad Abu Nabbut was ordered to accompany her. This resulted in the first archaeological excavation in Palestine.

[Lady Stanhope] and Meryon correctly analyzed the history of the structure in Ashkelon before methods of modern archaeological analyses were known or used.

In what might be rightfully called the first stratigraphical analysis of an archaeological site, [Meryon] reported that “there was every reason to believe that, in the changes of masters which Ascalon had undergone, the place in which we were now digging had originally been a heathen temple, afterwards a church, and then a mosque.” It must be remembered that at the same time in Greece, excavators blissfully ignorant of stratigraphy boasted only of the quantity and artistic quality of their finds.

While she did not find the hoard of three million gold coins reportedly buried there, the excavators unearthed a seven-foot headless marble statue. In an action which might seem at odds with her meticulous excavations, Stanhope ordered the statue to be smashed into "a thousand pieces" and thrown into the sea. She did this as a gesture of goodwill to the Ottoman government, in order to show that her excavation was intended to recover valuable treasures for them, and not to loot cultural relics for shipment back to Europe, as so many of her countrymen were doing at this time.

The statue dug up by Lady Hester at Ashkelon was therefore a dangerously tempting prize. Though headless and fragmentary, it was the first Greco-Roman artifact ever excavated in the Holy Land, a distinction that even Dr. Meryon recognized. Meryon was overjoyed with this discovery, and he supposed it to be the statue of a “deified king,” perhaps one of the successors of Alexander the Great or even Herod himself. But Lady Hester did not share her physician’s antiquarian enthusiasm, for she had a great deal personally at stake. She feared that if she paid too much attention to it, “malicious people might say I came to look for statues for my countrymen, and not for treasures for the [Sublime] Porte,” the customary phrase to describe the palace of the Sultan himself.

Stanhope was not digging the ruins in Ashkelon for her own personal greed and gain. She appeared to be doing so in order to elevate the region of the world she had come to call home, looking to return the gold to the Ottoman Sultan. Also, the destruction of the statue was done in order to prove her devotion and disprove the idea that she was just trying to pillage Palestine for Britain. Likewise, her excavations were quite methodical, well recorded for the time, and the statue was documented before its destruction. All of these things were unusual techniques for the time, and thus makes Stanhope’s excavation unique and valuable to history. I quite agree with Silberman’s conclusion that Stanhope’s excavation “might be rightfully called the first modern excavation in the history of archaeological exploration of the Holy Land.”

Life amongst the Arabs 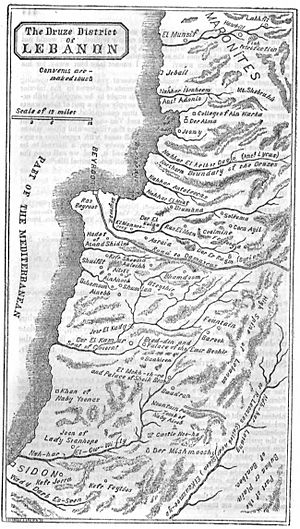 Lady Hester settled near Sidon, a town on the Mediterranean coast in what is now Lebanon, about halfway between Tyre and Beirut. She lived first in the disused Mar Elias monastery at the village of Abra, and then in another monastery, Deir Mashmousheh, southwest of the Casa of Jezzine. Her companion, Miss Williams, and medical attendant, Dr Charles Meryon, remained with her for some time; but Miss Williams died in 1828, and Meryon left in 1831, only returning for a final visit from July 1837 to August 1838. When Meryon left for England, Lady Hester moved to a remote abandoned monastery at Joun, a village eight miles from Sidon, where she lived until her death. Her residence, known by the villagers as Dahr El Sitt, was at the top of a hill. Meryon implied that she liked the house because of its strategic location, "the house on the summit of a conical hill, whence comers and goers might be seen on every side."

At first she was greeted by emir Bashir Shihab II, but over the years she gave sanctuary to hundreds of refugees of Druze inter-clan and inter-religious squabbles and earned his enmity. In her new setting, she wielded almost absolute authority over the surrounding districts and became the de facto ruler of the region. Her control over the local population was enough to cause Ibrahim Pasha, when about to invade Syria in 1832, to seek her neutrality. Her supremacy was maintained by her commanding character, and by the belief that she possessed the gift of divination. She kept up a correspondence with important people and received curious visitors who went out of their way to visit her.

Finding herself deeply in debt, she used her pension from England in order to pay off her creditors in Syria. From the mid-1830s she withdrew ever more from the world, and her servants began to steal her possessions, because she was less and less able to manage her household in her reclusive state. Stanhope may have suffered from severe depression; it has been suggested that, alternatively, she had become prematurely senile. At any rate, in her last years she would not receive visitors until dark, and even then, she would only let them see her hands and face. She wore a turban over her shaven head. She died in her sleep in 1839.

All content from Kiddle encyclopedia articles (including the article images and facts) can be freely used under Attribution-ShareAlike license, unless stated otherwise. Cite this article:
Lady Hester Stanhope Facts for Kids. Kiddle Encyclopedia.