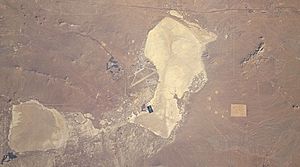 Rogers Lake and Rosamond Lake; most of the terrain on this image was formerly covered by Lake Thompson

During the Pleistocene, a number of lakes formed in the deserts of North America, these include Lake Bonneville in Utah, Lake Lahontan in Nevada, a cascade of lakes after Owens Lake, Lake Mojave and Lake Manly in California. Their formation was directed by cold periods of the last glacial maximum and other climate oscillations such as the Younger Dryas that reduced evaporation in the deserts, as well as storm tracks that were displaced south by the continental ice sheets.

Stickleback fish may have entered the lake through Peninsular Ranges drainages and a number of different animals from snails over fish, amphibians, reptiles, birds to mammoths have been found in lake sediments.

The catchment of Lake Thompson covers a surface area of 5,633 square kilometres (2,175 sq mi) and is bordered by the San Gabriel Mountains to the south and the Tehachapi Mountains in the west. Several creeks (such as Little Rock Creek) descending from the mountains nourished the lake, the lake had a number of tributaries.

When waters reached an elevation of 710 metres (2,330 ft), the maximum depth of the lake would have been about 70 metres (230 ft) based on borehole data. It is possible that Lake Thompson overflowed northwards, into the Fremont Valley;. presently the sill that water would have to flow over is too high for spilling of a 710 metres (2,330 ft) lake to occur, but later sedimentation may have raised the sill. An overflow eastward close to Boron, California towards the Mojave River and/or Lake Harper is also possible but less likely.

The lake does not exist anymore, owing to a drier present-day climate, although parts of its former bed can flood during wet winters. Rogers Lake, Rosamond Lake and Buckskin Lake are located on the bed of former Lake Thompson. The rest of the lakebed is covered with lacustrine sediments, although fluvial and aeolian sediments also cover parts of the lakefloor.

All content from Kiddle encyclopedia articles (including the article images and facts) can be freely used under Attribution-ShareAlike license, unless stated otherwise. Cite this article:
Lake Thompson (California) Facts for Kids. Kiddle Encyclopedia.