Lake Wanaka is located in the Otago region of New Zealand, at an altitude of 300 metres. Covering an area of 192 km2 (74 sq mi), deep. Its name is Māori, a corruption of Oanaka ('The place of Anaka', a local tribal chief).

Wanaka is a town on the lake with which it shares its name.

Lake Wanaka lies at the heart of the Otago Lakes in the lower South Island of New Zealand. The township is situated in a glacier carved basin on the shores of the lake and is the gateway to Mt Aspiring National Park. Lake Hāwea is a 15-minute drive away, en route to the frontier town of Makarora, the last stop before the West Coast Glacier region. To the south is the historic Cardrona Valley, offering an alpine route to neighbouring Queenstown. Otago Geography

At its greatest extent, which is roughly along a north-south axis, the lake is 42 kilometres long. Its widest point, at the southern end, is 10 kilometres. The lake's western shore is lined with high peaks rising to over 2000 metres above sea level. Along the eastern shore the land is also mountainous, but the peaks are somewhat lower.

Wanaka lies in a u-shaped valley formed by glacial erosion during the last ice age, more than 10,000 years ago. It is fed by the Matukituki- and Makarora Rivers, and is the source of the Clutha River. Nearby Lake Hāwea lies in a parallel valley carved by a neighbouring glacier eight kilometres to the east. At their closest point (a rocky ridge called The Neck), the lakes are only 1,000 metres apart.

Numerous small islands (notably Ruby Island, Stevensons Island and Harwich Island) are to be found at the southern end of the lake, with some now serving as ecological sanctuaries, for example for buff weka in case of Stevensons Island. The only flat land around the lake is also to be found here, surrounding the outflow into the Clutha River. The towns of Wanaka and Albert Town are situated here.

While Māori had long known of its existence, the first European to reach the lake is thought to have been Nathaniel Chalmers in 1853. Accompanied by Māoris, he walked from Tuturau (Southland) to the lake via the Kawarau River, later returning by a raft floating down the Clutha. Around 1859, other explorers who were now mapping the area also found a ruined Māori village (destroyed in a tribal raid in 1836) in the Makarora Valley. Around 1861, several new sheep stations had been established in around the south end of the lake, and in 1862, the lake itself was surveyed in a whaleboat. The early European name was Lake Pembroke.

Current use and tourism 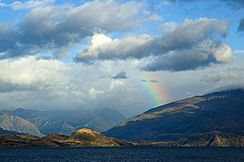 Lake Wanaka on an overcast day.

In addition to ongoing sheep farming, the lake is now a popular resort, and is much used in the summer for fishing, boating and swimming. The nearby mountains and fast-flowing rivers allow for adventure tourism year-round, with jetboating and skiing facilities located nearby.

Lake Wanaka was repeatedly mentioned in the movie Mission Impossible III as a location the lead couple visited. It was the answer to Tom Cruise's question on the phone to verify the identity of his wife.

The cook and author Annabel Langbein owns a small estate at the side of the lake and filmed her series 'The Free Range Cook' and 'Simple Pleasures' here.

As one of the few lakes in the South Island with an unmodified shoreline, the lake is protected by special legislation, namely the Lake Wanaka Preservation Act of 1973. This established a 'Guardians of Lake Wanaka' group, whose members are appointed by the Minister of Conservation, and advise on measures to protect the lake.

Oxygen weed (Lagarosiphon major), an aquarium plant and invasive species native to Southern Africa, has been a problem in the lake's ecosystem for some time. Attempts to eradicate the weed have not been successful yet. Substantial suction dredging operations have shown promise, but tend to miss isolated spots which then regrow into larger weed beds.

All content from Kiddle encyclopedia articles (including the article images and facts) can be freely used under Attribution-ShareAlike license, unless stated otherwise. Cite this article:
Lake Wanaka Facts for Kids. Kiddle Encyclopedia.