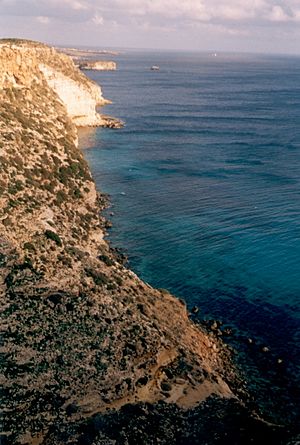 Lampedusa is the largest of the Pelagie Islands. Sicily is 205 km to the north, Tunisia is 113 km to the south. There are no sources of freshwater on the island, so those living there collect rainwater. Fauna and Flora, as well as the climate is similar to what can be found in North Africa.

There is a NATO base on the island. It is also a popular destination for refugees who try to enter the European Union that way.

All content from Kiddle encyclopedia articles (including the article images and facts) can be freely used under Attribution-ShareAlike license, unless stated otherwise. Cite this article:
Lampedusa Facts for Kids. Kiddle Encyclopedia.