Largentière (Occitan: L'Argentièira) is a commune in the Ardèche department of the Auvergne-Rhône-Alpes region in southeastern France. It is a subprefecture of the department.

Its name, used since the thirteenth century in place of its more ancient name Segualeriae (Ségualières), refers to the silver mines in the area between the tenth and fifteenth centuries.

The commune of Largentière is in the southern part of the Ardèche department, in the narrow valley of the Ligne river, a short right tributary of the Ardèche river.

The distances from Largentière to other cities are:

Largentière is surrounded by the communes:

The Köppen climate classification type for the climate at Largentière is an "Oceanic climate" (also known as Maritime Temperate climate) and of the subtype "Cfb".

With a population of 1,734, Largentière has a population density of 240 inhabitants/km2. It is the second smallest subprefecture in France after Castellane in the Alpes-de-Haute-Provence department that has only 1,541 inhabitants (2014).

Evolution of the population in Largentière 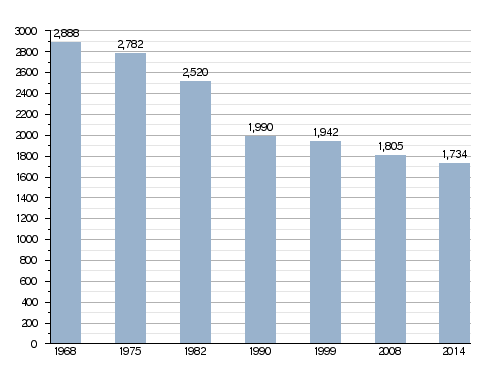 Largentière is a subprefecture of the Ardèche department since 1800. It is also the capital of the arrondissement of Largentière and is part of the canton Vallon-Pont-d'Arc.

All content from Kiddle encyclopedia articles (including the article images and facts) can be freely used under Attribution-ShareAlike license, unless stated otherwise. Cite this article:
Largentière Facts for Kids. Kiddle Encyclopedia.