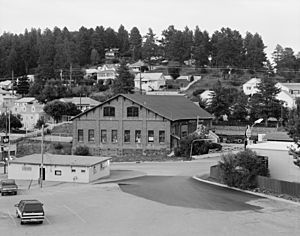 Buildings on Lead's western side

Lead ( LEED) is a city in Lawrence County, South Dakota, United States. The population was 3,124 at the 2010 census. Lead is located in western South Dakota, in the Black Hills near the Wyoming state line.

The city was officially founded on July 10, 1876, after the discovery of gold. The city was named for the leads or lodes of the deposits of valuable ores. It is the site of the Homestake Mine, the largest, deepest (8,240 feet [2,510 m]) and most productive gold mine in the Western Hemisphere before closing in January 2002. By 1910, Lead had a population of 8,382, making it the second largest town in South Dakota.

In the early 1930s, due to fear of cave-ins of the miles of tunnels under Lead's Homestake Mine, many of the town’s buildings located in the bottom of a canyon were moved further uphill to safer locations.

Lead and the Homestake Mine have been selected as the site of the Deep Underground Science and Engineering Laboratory, a proposed NSF facility for low-background experiments on neutrinos, dark matter, and other nuclear physics topics, as well as biology and mine engineering studies.

In 1974, most of Lead was added to the National Register of Historic Places under the name of the "Lead Historic District". Over 400 buildings and 580 acres (230 ha) were included in the historic district, which has boundaries roughly equivalent to the city limits. 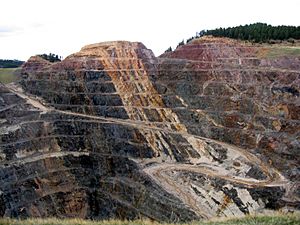 The Homestake Mine pit in Lead, South Dakota

According to the United States Census Bureau, the city has a total area of 2.06 square miles (5.34 km2), all of it land.

Two prominent man-made features of Lead's geography are the giant open cut, which was used for surface gold mining by the Homestake Mine, and the resulting ridge nearby built with the non-producing material from the cut.

In the summer, there are numerous trails for hiking, mountain biking, and horse back riding. The George S. Mickelson Trail, which runs from Edgemont to Deadwood, runs through the city. Several man made lakes, including Sheridan Lake provide fishing and swimming. Spearfish Canyon to the north has many places to rock climb.

During the winter there are two ski areas just a few miles outside of Lead. Terry Peak and Deer Mountain are both full service ski areas. 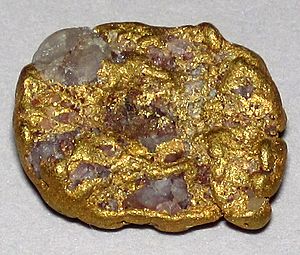 All content from Kiddle encyclopedia articles (including the article images and facts) can be freely used under Attribution-ShareAlike license, unless stated otherwise. Cite this article:
Lead, South Dakota Facts for Kids. Kiddle Encyclopedia.