Lawrence County is a county in the U.S. state of South Dakota. As of the 2020 United States Census, the population was 25,768. Its county seat is Deadwood.

Lawrence County was created January 11, 1875, and organized in 1877. The county was named for "Colonel" John Lawrence who came to the county as first treasurer in 1877. Lawrence had previously served in the Dakota Territorial Legislature, as a Sergeant at Arms for the United States House of Representatives, and a US Marshal for the Dakota territory. After retirement he continued to act as county road supervisor and as an election judge. The title "Colonel" was honorary, bestowed by the governor of the Dakota Territory. 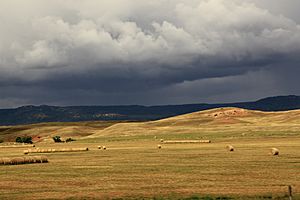 The county is divided into one township: St. Onge; and two areas of unorganized territory: North Lawrence and South Lawrence.

All content from Kiddle encyclopedia articles (including the article images and facts) can be freely used under Attribution-ShareAlike license, unless stated otherwise. Cite this article:
Lawrence County, South Dakota Facts for Kids. Kiddle Encyclopedia.