Lebanon is a city in and the county seat of Warren County, Ohio, United States, in the state's southwestern region, within the Cincinnati metropolitan area. The population was 20,033 at the 2010 census.

Lebanon is in the Symmes Purchase. The first European settler in what is now Lebanon was Ichabod Corwin uncle of Ohio Governor Thomas Corwin who came to Ohio from Bourbon County, Kentucky and settled on the north branch of Turtle Creek in March 1796. The site of his cabin is now on the grounds of Berry Intermediate School on North Broadway and is marked with a monument erected by the Warren County Historical Society.

The town was laid out in September 1802 on land owned by Ichabod Corwin, Silas Hurin, Ephraim Hathaway, and Samuel Manning in Sections 35 and 35 of Town 5, Range 3 North and Sections 5 and 6 of Town 4, Range 3 North of the Between the Miami Rivers Survey. Lebanon was named after the Biblical Lebanon because of the many juniper or Eastern Redcedar trees there, similar to the Lebanon Cedar. It is known today as "The Cedar City".

City legend has it that Lebanon didn't grow as large as Cincinnati or Dayton because of the 'The Shaker Curse.' During their migration, the Shakers decided an area outside of town was a suitable place for them to create a homeland for themselves. There was a disagreement with some of the locals and it was said the Shakers placed a curse on the city to hinder the city's prosperity. In reality, the Shakers thrived in the area, and built a settlement about 4 miles west of Lebanon called Union Village. A local man, Malchalm Worley was their first convert. Since the Shakers did not engage in procreation, they relied on converts to increase their numbers. By 1900, there were almost no Shakers left in Ohio.

There were 7,436 households, of which 41.2% had children under the age of 18 living with them, 51.3% were married couples living together, 13.5% had a female householder with no husband present, 5.3% had a male householder with no wife present, and 29.9% were non-families. 24.4% of all households were made up of individuals, and 7.9% had someone living alone who was 65 years of age or older. The average household size was 2.62 and the average family size was 3.12.

Lebanon lies largely within the Lebanon telephone exchange, but parts are in the Mason and South Lebanon exchanges. Local and long distance telephone services for the city are primarily provided by CenturyLink (formerly Embarq, Sprint's local telephone division) and Cincinnati Bell.

The city is one of the few in the nation to once operate a government-run cable television and telephone service, as well as being a fiber-to-the-neighborhood Internet service provider. Controversial since it began operation in 1999, the Lebanon telecommunications system had struggled to recover its expenses and had accumulated over $8 million in debt. However, residents in the area, at the time, paid up to 50% less for the aforementioned services than neighboring communities, therefore saving over $40 million of the residents' money. In the 2006 general election, however, voters approved the sale of this city-run telecommunications system to Cincinnati Bell.

Prisons operated by the Ohio Department of Corrections in the area include: 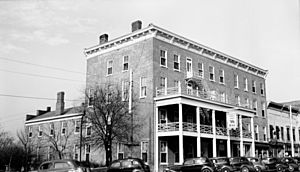 The Golden Lamb Inn is located in Lebanon on the corner of S. Broadway and Main St. It is recognized as Ohio's oldest inn, having been established in 1803 and has been visited by 12 presidents.

The Warren County Historical Museum is recognized as one of the nation's most outstanding county museums. It includes the Warren County History Center, housed in Harmon Hall, a three-story, 28,000-square-foot building with displays and artifacts from prehistoric eras to the mid-20th century.

The Glendower Historic Mansion, owned by the Warren County Historical Society, was erected circa 1845. It provides a classic example of residential Greek Revival architecture and a natural setting for many elegant Empire and Victorian furnishings from Warren County's past.

Lebanon is home to the Lebanon Mason Monroe Railroad, where passengers follow an old stage coach route passing meadow, pasture, a rippling creek and wildflowers along the way.

Harmon Golf Club is a nine-hole, par 36 public golf course located on South East Street. It was built in 1912.

The 1978 movie Harper Valley PTA with Barbara Eden and the 1994 movie Milk Money with Ed Harris and Melanie Griffith were both shot in Lebanon. The Village Ice Cream Parlor contains memorabilia from both movies.

The city is served by a lending library, the Lebanon Public Library.

All content from Kiddle encyclopedia articles (including the article images and facts) can be freely used under Attribution-ShareAlike license, unless stated otherwise. Cite this article:
Lebanon, Ohio Facts for Kids. Kiddle Encyclopedia.