List of Prime Ministers of India facts for kids 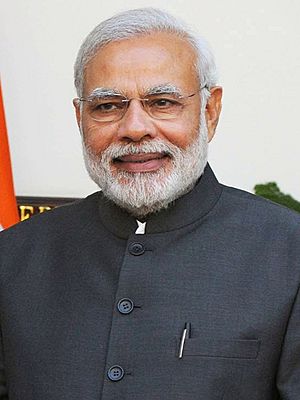 Narendra Modi is the current Prime Minister of India, since 26 May 2014.

Since the Independence of India, India has had fifteen prime ministers. The first was Jawaharlal Nehru of the Indian National Congress party.

The current prime minister is Narendra Modi. He was sworn in on 26 May 2014.

All content from Kiddle encyclopedia articles (including the article images and facts) can be freely used under Attribution-ShareAlike license, unless stated otherwise. Cite this article:
List of Prime Ministers of India Facts for Kids. Kiddle Encyclopedia.