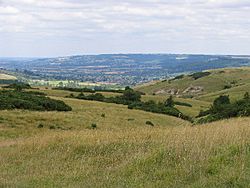 Cleeve Common is designated a biological and geological site

This is a list of the Sites of Special Scientific Interest (SSSIs) in Gloucestershire. Natural England, the designating body for SSSIs in England, uses the 1974-1996 county system, and this list follows the same approach. Some sites you may expect to find here could therefore be in the Avon list. It may also be that a site may on the borders of more than one county. It may also be on the country borders.

Gloucestershire has 3 Areas of Outstanding Natural Beauty being the Cotswolds, Malvern Hills, and the Wye Valley (the latter is also partly in Wales). These areas may include several SSSIs, or be named an SSSI as is the case for the Malvern Hills.

Gloucestershire has 2 designated Ramsar sites being the Severn Estuary and Walmore Common both SSSIs. These two sites are also designated as Special Protection Areas (SPA) under the EC Directive on the conservation of Wild Birds.

For other counties, see List of SSSIs by Area of Search.

All content from Kiddle encyclopedia articles (including the article images and facts) can be freely used under Attribution-ShareAlike license, unless stated otherwise. Cite this article:
List of Sites of Special Scientific Interest in Gloucestershire Facts for Kids. Kiddle Encyclopedia.