The site (Lancaut and Ban-y-gor) is listed in the 'Forest of Dean Local Plan Review' as a Key Wildlife Site (KWS).

Wye Valley Woodlands/ Coetiroedd Dyffryn Gwy are recognised as a Special Area of Conservation (SAC) under the EU Habitats Directive.

The Lower Wye valley Gorge is in the Wye Valley Area of Outstanding Natural Beauty. The woodlands of the lower Wye Valley are one of the most important areas for woodland conservation in the United Kingdom. This is an area of semi-natural woodland which is continuous along the gorge sides. The woods are a mixture of stand types which are considered to be similar to the original natural woods of the valley. Rare and local species are present. 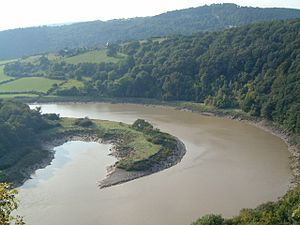 A view north of the River Wye, Lancaut 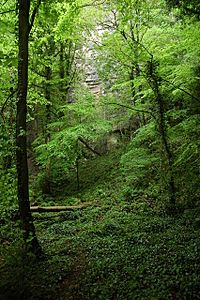 Lancaut reserve is a 24-hectare (59-acre) site and lies on the east bank of the Wye Gorge, north of Chepstow. The gorge is formed from massive Lower Carboniferous limestones and sandstones and rises 250 ft above the tidal River Wye. The reserve is made up of Lancaut Wood, Pen Moel and Chapelhouse Woods, disused quarries, limestone cliffs, and saltmarsh. It is one of the few sites in the United Kingdom showing the natural transition from saltmarsh to valley woodland. It became a Gloucestershire Wildlife Trust reserve in 1971. There is a public footpath which runs through the woods from the ruins of Lancaut Chapel to below Pen Moel, which returns by Offa's Dyke Path.

The steep slopes and historic quarrying of limestone for agriculture and construction, such as the Avonmouth Docks, have resulted in a diverse woodland. Trees include pedunculate oak, ash, field maple, yew, small-leaved lime, wild service-tree, wayfaring tree and rare whitebeams.

Lancaut's cliffs, which are south-facing, are regular nesting sites for peregrine falcons and ravens. Sparrowhawk, goshawk, kestrel, cormorant, heron, shelduck, wood warbler, lapwing and goldcrest are amongst the wide range of birds recorded. `

Invasive Sycamore is controlled and scrub removed from limestone scree areas to promote a grassland flora. Erosion of the saltmarsh from natural and artificial causes is considered a major problem.

Ban-y-gor Wood is a 23.2-hectare (57-acre) site and faces north and is, therefore, a much darker, cooler and wetter wood than Lancaut. The wood was donated to the Gloucestershire Wildlife Trust in 1995 by the Clay Estate, and part of Lancaut was given at the same time. The wood descends about a 100 metres down to the River Wye edge. The slopes are very steep and there are areas of cliff exposures, bare sandstone, and limestone rocks. Although steep and potentially inaccessible, there is evidence of quarrying in the past. There is derelict winding gear present which was used to pump water up from the river.

This is an area of secluded habitat, carpeted with ferns and mosses, with large ancient coppice and pollards. A single path descends via a small glade towards the river.

Dormice are recorded within the woodland.

Structural variety is increased by cutting glades and small coppice coupes particularly either side of the path.

All content from Kiddle encyclopedia articles (including the article images and facts) can be freely used under Attribution-ShareAlike license, unless stated otherwise. Cite this article:
Lower Wye Gorge SSSI Facts for Kids. Kiddle Encyclopedia.