List of birds of Tristan da Cunha facts for kids 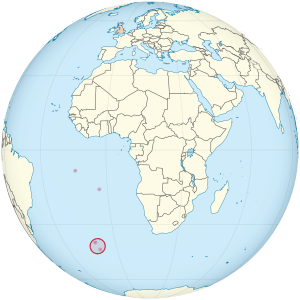 This is a list of the bird species recorded in Tristan da Cunha. The avifauna of Tristan da Cunha include a total of eighty-eight species, of which twelve are endemic or breeding endemic, and one is extinct.

This list's taxonomic treatment (designation and sequence of orders, families and species) and nomenclature (common and scientific names) follow the conventions of The Clements Checklist of Birds of the World, 2018 edition.

The following tags have been used to categorise some species:

Includes all but four species of Anseriformes. They are excellent at an aquatic life thanks to an oily covering on their feathers. One species has been recorded in Tristan da Cunha.

Cuckoos are found almost worldwide. They are highly variable in size, shape, colour, and habits.

Nighthawks belong to the same family as nightjars but are found only in the Americas. They have mottled or striped plumage for camouflage.

Rails are usually secretive birds. Many island species are flightless and many of those have gone extinct in the last five centuries. Gallinules are less secretive, and are usually found near or on water.

Penguins are southern ocean birds with only one species north of the equator. Small to large in size and mostly black and white in colour. Five species have been recorded in Tristan da Cunha.

Order Phaethontiformes   Family Phaethontidae Tropicbirds are seabirds once thought to be closely related to pelicans but now known to belong in a clade known as Metaves. Three species have been record in Tristan da Cunha.

Order Procellariiformes   Family Procellariidae Petrels and shearwaters are known collectively as tubenoses for the tubes on their beaks which they use for excreting salt. There are 22 species in Tristan da Cunha.

Albatrosses are large tubenoses with wingspans of more than a meter. Most are southern ocean species but some are found in the north Pacific Ocean. There are seven species in Tristan da Cunha.

Plovers are small to medium-sized wading birds found worldwide, which live both on coasts and inland. Two species have been recorded in Tristan da Cunha.

Scolopacidae is a large diverse family of small to medium-sized shorebirds including the sandpipers, curlews, godwits, shanks, tattlers, woodcocks, snipes, dowitchers and phalaropes. The majority of these species eat small invertebrates picked out of the mud or soil.

The family Stercorariidae are, in general, medium to large birds, typically with grey or brown plumage, often with white markings on the wings. They nest on the ground in temperate and arctic regions and are long-distance migrants.

Laridae is a family of medium to large seabirds, the gulls, terns, and skimmers. Gulls are typically grey or white, often with black markings on the head or wings. They have stout, longish bills and webbed feet. Terns are a group of generally medium to large seabirds typically with grey or white plumage, often with black markings on the head. Most terns hunt fish by diving but some pick insects off the surface of fresh water. Terns are generally long-lived birds, with several species known to live in excess of 30 years.

Storks are large, long-legged, long-necked, wading birds with long, stout bills. Storks are mute, but bill-clattering is an important mode of communication at the nest. Their nests can be large and may be reused for many years. Many species are migratory. Only one species is a visitor to Tristan da Cunha.

Falconidae is a family of diurnal birds of prey. They differ from hawks, eagles and kites in that they kill with their beaks instead of their talons. One species has been recorded in Tristan da Cunha.

Order: Passeriformes   Family: Thraupidae This large family includes the true tanagers, as well as a number of other species often referred to simply as "finches", although they are not members of the true finch family.

All content from Kiddle encyclopedia articles (including the article images and facts) can be freely used under Attribution-ShareAlike license, unless stated otherwise. Cite this article:
List of birds of Tristan da Cunha Facts for Kids. Kiddle Encyclopedia.