List of tallest buildings in North Hudson facts for kids

North Hudson comprises the municipalities of Weehawken, Union City, West New York, Guttenberg and North Bergen in Hudson County, New Jersey. With a 2010 United States Census population of 201,000, the contiguous urban area, one of the most densely populated places in the nation, is largely situated atop the Palisades on the Hudson Waterfront of west bank of the Hudson River.

On the Palisades overlooking the Hudson, from left to right: The Riveria, Tower West, The Versailles, The Galaxy, Parker Imperial, and the Stonehenge were built in the 1960s-1970s.The cluster of high-rises on Boulevard East is situated on the Hudson Waterfront between the tallest buildings in Jersey City and Fort Lee.

The area lies north of Hoboken and Jersey City across the river from Midtown Manhattan and Upper West Side in New York City and east of the New Jersey Meadowlands. Its high elevation of about 260 ft (79 m) affords North Hudson expansive views of the Manhattan skyline to east and the Meadowlands, and beyond to the Watchung Mountains, to the west. Many of the tall buildings are part of string of residential high-rises that continues north along the Boulevard East-Palisade Avenue-River Road corridors into the eastern Bergen County towns of Cliffside Park, Edgewater and Fort Lee. Many of the buildings went up during a boom in development in the late 1960s and early 1970s. 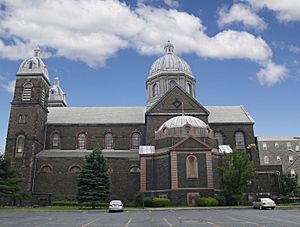 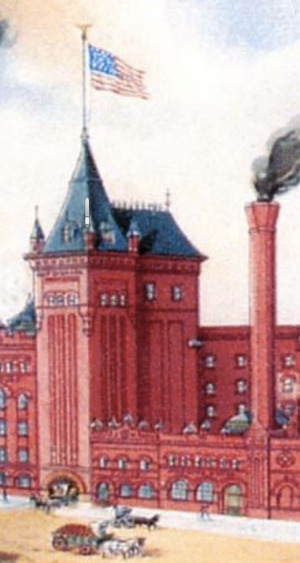 The Hudson County Brewing Company headquarters circa 1901 in what was West Hoboken, was razed in 1930s on site of the also demolished Roosevelt Stadium 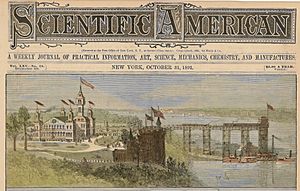 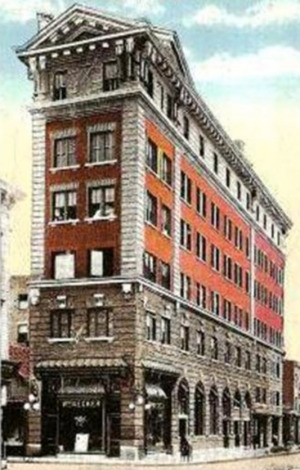 The White Brewery was built adjacent to Hudson Palisades, the site of today's Galaxy Towers in 1855. The 8-story building was destroyed in fire in1896.

In 1890, the North Hudson County Railway built an elevator tower and viaduct to connect with trains at Weehawken Terminal with its street car lines on top of the Palisades. With the closure of the Gutenberg Racetrack, traffic diminished and the service discontinued. The 153 ft (47 m) tall towers supporting the 873 ft (266 m) long viaduct were dismantled in 1900.

The Hudson County Brewing Company headquarters and plant built circa 1901 in what was West Hoboken was demolished in the early 1930s and became the site of Roosevelt Stadium.

The WOR TV Tower was a 760 ft (230 m) tall lattice tower used for FM- and TV-broadcasting at North Bergen built in 1949, which at that time made the tenth tallest man-made structure in the world. On November 8, 1956, the top of the tower was hit by a small aircraft, which knocked off the top and killed six people. It was later dismantled.

All content from Kiddle encyclopedia articles (including the article images and facts) can be freely used under Attribution-ShareAlike license, unless stated otherwise. Cite this article:
List of tallest buildings in North Hudson Facts for Kids. Kiddle Encyclopedia.