One of its biggest attractions is a 20,000-US-gallon (76,000 l) coral reef display tank, which is one of the largest all-living coral displays in the Western Hemisphere.

Construction on the aquarium began in 1999, and it opened on June 15, 2000. The Town of Riverhead bought the land in 1995 with the hopes the Okeanos Foundation of Hampton Bays, New York would operate it as part of a rehabilitation project of the Peconic waterfront. However, Okeanos was unable to raise funds. Space has been given in the aquarium to the Riverhead Foundation for Marine Research and Preservation.

On July 1, 2011, it changed its name to Long Island Aquarium and Exhibition Center after undergoing a $24 million expansion including a brand-new Exhibition Center, a 28,000-square-foot (2,600 m2) Sea Star Grand Ballroom (which joined its successful catering component, Atlantis Banquets & Events), as well as construction of a 100-room waterfront Hyatt Place Hotel. The aquarium also owns and operates a 120-slip marina called Treasure Cove Resort Marina. The aquarium was featured in the 5th season of The Apprentice.

The Amazon Rainforest exhibit at the Long Island Aquarium reminds us of our responsibility to our planet's environment and animal life by showcasing some of the largest and most interesting Amazon fishes and aquatic life. 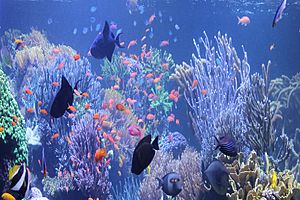 All content from Kiddle encyclopedia articles (including the article images and facts) can be freely used under Attribution-ShareAlike license, unless stated otherwise. Cite this article:
Long Island Aquarium and Exhibition Center Facts for Kids. Kiddle Encyclopedia.