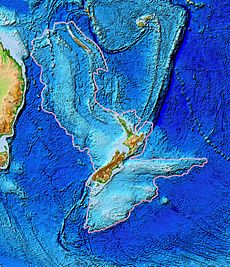 The Lord Howe Rise is part of the continent known as Zealandia.

The Lord Howe Rise is a deep sea plateau which extends from south west of New Caledonia to the Challenger Plateau, west of New Zealand in the south west of the Pacific Ocean. To its west is the Tasman Basin and to the east is the New Caledonia Basin. Lord Howe Rise has a total area of about 1,500,000 square km, and generally lies about 750 to 1,200 metres under water. It is part of Zealandia, a much larger continent that is now mostly submerged, and so is composed of continental crust.

The Lord Howe Rise was formed by seafloor spreading which also resulted in the creation of the Tasman Sea. It was rifted away from Eastern Australia by a mid-ocean ridge that was active from 80 to 60 million years ago, and now lies 800 kilometres offshore from mainland Australia.

The Lord Howe Rise contains a line of seamounts called the Lord Howe Seamount Chain which formed during the Miocene period when this part of Zealandia existed over the Lord Howe hotspot. Lord Howe was the last volcano to erupt on the rise.

Lord Howe Island and Ball's Pyramid cap a seamount towards the central east of the rise in an area known as the Lord Howe platform. The Lord Howe Seamount Chain extends northwards along the rise. The seamounts provide habitat to a diverse range of marine species which attracts commercial fishers, but cover a very small area, less than 1% of the total area of Lord Howe Rise.

Further north is the Elizabeth and Middleton part of the Coral Sea Islands, which together with reefs around Lord Howe Island are the most southern coral reefs on Earth.

The Seabed on the rise is mostly sandy mud with some volcanic outcrops, gravel and boulders.

The Coris bulbifrons is endemic to reefs only on the Lord Howe Rise and the West Norfolk Rise.

Much of the basin remains unexplored in relation to oil and gas reserves.

All content from Kiddle encyclopedia articles (including the article images and facts) can be freely used under Attribution-ShareAlike license, unless stated otherwise. Cite this article:
Lord Howe Rise Facts for Kids. Kiddle Encyclopedia.