Ball's Pyramid is an erosional remnant of a shield volcano and caldera lying 20 kilometres (12 mi) southeast of Lord Howe Island in the Pacific Ocean. It is 562 metres (1,844 ft) high, while measuring only 1,100 metres (3,609 ft) in length and 300 metres (984 ft) across, making it the tallest volcanic stack in the world. Ball's Pyramid is part of the Lord Howe Island Marine Park in Australia and is over 643 kilometres (400 mi) northeast of Sydney, New South Wales.

Steep, eroded, and formed 6.4 million years ago, Ball's Pyramid is positioned in the centre of a submarine shelf and is surrounded by rough seas, making any approach difficult. 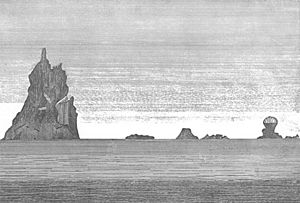 In The Voyage of Governor Phillip to Botany Bay with an Account of the Establishment of the Colonies of Port Jackson and Norfolk Island (1789), Arthur Phillip gives this description of the area around Ball's Pyramid, before describing Lord Howe Island:

There lies about four miles from the south-west part of the pyramid, a dangerous rock, which shows itself a little above the surface of the water, and appears not to be larger than a boat. Lieutenant Ball had no opportunity of examining whether there is a safe passage between them or not.

The first recorded person to go ashore is believed to have been Henry Wilkinson, a geologist at the New South Wales Department of Mines, in 1882.

In 1964 a Sydney team, which included adventurer Dick Smith and other members of the Scouting movement, attempted to climb to the summit of the pyramid; however, they were forced to turn back on the fifth day as they ran short of food and water.

Ball's Pyramid was first climbed on 14 February 1965 by Bryden Allen, John Davis, Jack Pettigrew and David Witham of the Sydney Rock Climbing Club. Jack Hill of New Zealand then climbed to the summit with Jack Pettigrew on the following day. Don Willcox and Ben Sandilands were part of the support team.

In 1979, Smith returned to the pyramid, together with climbers John Worrall and Hugh Ward. They successfully reached the summit and unfurled a flag of New South Wales provided to them by Premier Neville Wran, declaring the island Australian territory (a formality which it seems had not previously been done).

The shelf is 20 kilometres (12 mi) in length and averages 10 kilometres (6.2 mi) in width and lies under an average depth of 50 metres (160 ft) of water. It is separated by a 500-metre-deep (1,600 ft) submarine canyon from another shelf on which Lord Howe Island is located. The cliffs of the stack continue under the water surface to the level of the shelf.

A Melaleuca howeana shrub was found growing on Ball's Pyramid. The bush was growing in a small crevice where water was seeping through cracks in the underlying rocks. This moisture supported relatively lush plant growth which had, over time, resulted in a buildup of plant debris several metres deep.

Following the last sighting of the Lord Howe Island stick insect on Lord Howe Island in 1920, the species was presumed extinct. Evidence of continued survival on Ball's Pyramid was discovered during the 1964 climb when a dead specimen was found and photographed. Throughout the following years, several more dead specimens were discovered, but attempts to find live specimens were unsuccessful.

In 2001, a team of entomologists and conservationists landed on Ball's Pyramid to chart its flora and fauna. As they had hoped, they discovered a population of the Lord Howe Island stick insect living in an area of 6 by 30 metres (20 by 100 ft), at a height of 100 metres (330 ft) above the shoreline, under a single M. howeana shrub. The population was extremely small, with only 24 individuals. Two pairs were brought to mainland Australia, and new populations have been successfully bred with the ultimate goal of reintroduction to Lord Howe Island.

In 2014 an unauthorised climbing team sighted live stick insects in an exposed position 65 metres below the summit of Ball's Pyramid in a thicket of sedge plants, suggesting that the insect's range on Ball's Pyramid is more widespread than previously held and its food preferences are not limited to Melaleuca howeana.

All content from Kiddle encyclopedia articles (including the article images and facts) can be freely used under Attribution-ShareAlike license, unless stated otherwise. Cite this article:
Ball's Pyramid Facts for Kids. Kiddle Encyclopedia.