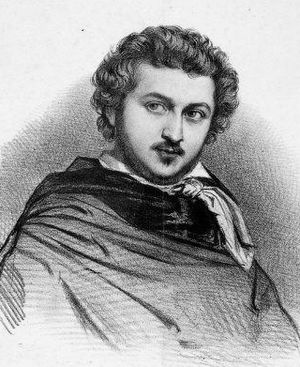 Jullien was born in Sisteron, in the French Alps. At his baptism he had 36 godfathers and was given 36 Christian names. He studied at the Paris Conservatoire. He was a good musician, but mostly he enjoyed popular dance music. He conducted a band, but had to leave Paris because he owed people a lot of money.

He went to London where he formed a good orchestra. His orchestra played at a series of summer concerts (called Concerts d’été). Later he conducted a series of winter concerts (Concerts d’hiver). Although he was a good conductor he was a great showman. He would make a big show of putting on his white gloves which were given to him on a silver plate. He used a special baton (conductor’s stick) which had jewels in it when he conducted Beethoven. He wore a white waistcoat and enormous wrist bands, and he had a huge moustache and long, black hair. He would throw himself around when conducting and finish by sinking into a velvet chair. The audience loved it, especially when he added military bands to his orchestra. He used to conduct facing the audience. He conducted concerts in the London theatres and parks (promenade concerts).

Jullien’s programmes included works by the great composers, e.g. Beethoven and Mozart, but they were always mixed with light music: dances, quadrilles, marches, etc. He often added lots of extra instruments to the great classics, e.g. when he conducted Beethoven’s Fifth Symphony he added four ophicleides, a saxophone and side drums.

Jullien travelled to Scotland, Ireland and America with his orchestra. In 1852 he produced an opera, Pietro il grande, at Covent Garden, but it cost a ridiculous amount of money and he was financially ruined.

Eventually he went back to France where he was arrested and put in prison because of his debts. He died in a lunatic asylum. His wife, to whom he had been happily married, lived on for many years, and their son Louis became a conductor and tried to conduct promenade concerts, but he did not have much success.

Jullien’s behaviour might seem strange to us today, but he lived at a time when the role of the conductor was becoming very important as orchestras had become much larger than they had been in the 18th century. He gave people who had never heard good classical music the chance to hear the music by the great composers. He had a very big influence on the musical scene in London and people talked about him for many years after his death.

All content from Kiddle encyclopedia articles (including the article images and facts) can be freely used under Attribution-ShareAlike license, unless stated otherwise. Cite this article:
Louis Antoine Jullien Facts for Kids. Kiddle Encyclopedia.