The Town of Lyons is a Statutory Town in Boulder County, Colorado, United States. The town population was 2033 at the 2010 United States Census, up from 1585 at the 2000 United States Census. Lyons is located at the confluence of North St. Vrain Creek and South St. Vrain Creek, 20 miles (32 km) east of Rocky Mountain National Park. Due to its location at the intersection of State Highway 7 and U.S. Highway 36 which lead to Rocky Mountain National Park, it is sometimes referred to as "The Double Gateway to the Rockies".

In the 17th century, the Ute Nation came to Colorado. The largest tribes that followed were the Cheyenne, Arapaho, and Comanche, along with the Pawnee occasionally. The Utes were the last tribe to be forced into Indian reservations after the Colorado Gold Rush. The Utes were the only tribe that extensively explored the mountains and Lyons area. The Plains Indians were attracted to the vast grasslands where it was ideal for hunting bison.

In the 1860s, families came from eastern United States and settled the foothills with their ranches and farms. The town of Lyons was founded in 1880 by Edward S. Lyon. He purchased 160 acres (0.6 km2) from H.F. and Isabelle Sawyer, noticing the potential to quarry out the red sandstone outcroppings which offered easy quarrying access in the region. Lyon platted the town in 1881; it was incorporated in 1891. No record survives to account for the added "s" at the end of the town's name.

The first main building to be built was the red sandstone schoolhouse in 1881. The booming population resulted in the town adding a second floor a few years later. It was also used for church and town meetings until 1894 when the Old Stone Church was built. In 1979, it was saved from demolition and converted into the town's history museum by the Lyons Historical Society.

The town has large red sandstone mountains on three sides. Its rock, from the Permian period, about 260 million years ago, is considered the hardest sandstone in the world, and has a unique red or salmon color. While E. S. Lyon established the quarrying business in the town, his business was not a big success, and he left for California. Numerous owners succeeded him and developed various successful quarries over time. Murphy, Brodie, Ohline, Loukonen and Vasquez are among the most noteworthy owners. A railroad built to the town in the late 19th century gave the quarries a significant boost.

In 1910-12 the cement industry killed the sandstone industry, and rock production stopped. The only sandstone construction that went on during this period was the University of Colorado's new unified campus. The sandstone business was revived in the 1930s when the red sandstone started to be used more as a decorative rock than for commercial purposes. Today it is a booming industry, with sandstone shipped worldwide.

On September 12, 2013, the town of Lyons was severely affected by flooding. All access routes to the town were blocked, and sewer and fresh water service was disrupted. The National Guard began evacuating the entire town of Lyons on September 12 at daybreak. While many mountain residents had to be evacuated by chinook helicopter, the towns residents were able to drive out in their own vehicles, as the main road thru town, hwy. 36, was not completely washed out.

The town is active in history preservation. The Lyons Historical Society, formed in 1976, helped preserve the 1881 school house (now the Lyons Redstone Museum) and the train depot (now municipal offices). It has recorded video interviews of its pioneer families and published four books on the town's history and five books on pioneer family histories. Lyons has a Designated Historic District, with fifteen sandstone structures which are listed in the National Register of Historic Places. These were all constructed of native stone by master craftsmen between the early 1870s and 1917. They include commercial, residential and public buildings: 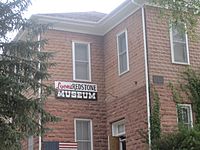 The Lyons Redstone Museum started out as the town's school house, built in 1881. Grades one through eight were taught, and graduation certificates were handed out. It was the first major building constructed in town. It stands on a small hill, overlooking the town. It is used as a guidepost for people studying old photographs of Lyons. The original 30-by-40-foot (9.1 by 12.2 m) building was made by expert stonemasons out of the local red sandstone. For the first few years, it was used for church services and town meetings. The population boomed, and in 1895 there was a need to add a second floor. It was more for practical purposes and was not as beautifully designed. When the town built an elementary and high school, the school district decided to raze the building. The Lyons Historical Society fought for three years, and it was rewarded with use of a building to establish their history museum in.

The museum is open June 1 to October 1, seven days a week. It was dedicated in 1979. It is free and open to the public on a donation basis. Its director is LaVern Johnson. The first floor has historic displays (including an old bank teller cage, re-created living room and kitchen area, quarry and small farm equipment, musical instruments, dairy equipment, and more). It has arrowhead and electric insulator collections. The first-floor work area contains the town's history archives (mainly newspaper clippings), video interviews and documentaries of its pioneer families, and a small gift and book shop. Books for sale include multiple history books of the area, and hundreds of used books from 1900 to today.

The second floor has some displays (like ice cream parlor booths), but mainly it has dozens of archival black-and-white photographs of early Lyons, from the 1880s to 1940s. Along the walls are all of the Lyons High School graduation photos, beginning in the 1930s. Since the 1881 building did not open as a museum until the 1970s, some of the records are incomplete regarding early town history, but it is extensively covered by the locally produced books and DVD documentaries. It is located at 412 High Street in Lyons.

John Gierach is the author of numerous books on fly-fishing. His work has appeared in Field & Stream, Gray’s Sporting Journal, and Fly Rod & Reel, where he is a regular columnist. He also writes a column for the monthly Redstone Review. John Gierach is considered by many to be the best author of American fishing folklore.

Mike Clark of South Creek LTD. is a world class bamboo fly rod maker. Some say that he is the best in the country and world. His bamboo fly rods are known to aid in fooling the trickiest of trout and make the men and women who cast them climax at any random point while fishing.

The free Lyons Studio Tour (formerly Lyons Artique) is held each year, since 2004, for one weekend in May or June, with up to 50 artists showing their work in their home studios or in Lyons shops and galleries. For two years, there was a Sculpture Trail with several dozens pieces made specifically for the Trail. It featured a trail of outdoor sculptures along a pre-determined path. An annual booklet had quotes from the artists, and contained a story that people could follow as they took the Trail. Kristine Smock and John King developed the Trail and had a collaborative piece placed at the entrance to Main Street for one year. Polar Bear Gallery artist Barbara Stone was the first to have a permanent sculpture installed. A ring of bear stone etched tiles were placed next to the Lyons Depot Library.

The Lyons Arts and Humanities Council is a group that is instrumental in helping to promote art in downtown Lyons and its artists' works. There are several pieces of permanent public art, including sculptures made of local sandstone, such as giant eggs, flower containers, a fountain, a small performance stage, and more.

In 2008 and 2009, the town renovated its two main streets to include sandstone sidewalks and features, floral decorations, seating areas and sculptures. It won a Governor's Award for Downtown Excellence in 2010.

As a public community art project, a mural depicting life in Lyons, called "Lyons Past, Present and Future", was placed on the outdoor wall of the Visitor Center in June 2003. At that time, the group gave itself the name Confluence Community Arts (CoCoA). It is mainly run by Cathy Rivers and Priscalla Cohan, who have gone on to start a second project, called The Clarifier Project, which involves the community painting tiles to decorate the old circular cement building next to St. Vrain Creek.

Major concerts in Lyons are the two annual music festivals held at Planet Bluegrass: the Rockygrass Bluegrass festival, and the Folks Festival folk music festival. It draws people from across the nation because of its nationally known lineup and its general seating in open grassy, treed grounds, at the base of a red sandstone mountain along St. Vrain Creek. In addition to a new stage for the festivals in recent years, they have built the Wildflower covered pavilion which allows for smaller year-round concerts.

The Sounds of Lyons concert series began in 2009, bringing in highly acclaimed classically trained musicians, including founder MinTze Wu, to perform over one weekend in spring. High Street Concerts began in 2001, and concerts take place during the winter months bringing national and local acoustic and Americana acts. The volunteer-run concert series was founded by KC Groves, Sam Tallent, and Mike Whipp. In addition, there are sporadic community concerts and dances throughout the year, including weekly summer concerts in Sandstone Park and occasionally at Lyons High School. The Red Rock Ramblers, founded by the LaVerne Johnson family and friends, began square dancing in Lyons in 1958 and offer dances every Saturday during the summer.

The Town of Lyons is served by the Lyons Fire Protection District and the Boulder Sheriff's Department. Lyons is part of the St Vrain Valley School District and is home to Lyons High School and an elementary school.

The town has no hospitals and is serviced by Longmont United Hospital or Boulder Community Hospital which are within a short drive. The Fire Department provides emergency services including EMT duties.

There were 672 households out of which 33.8% had children under the age of 18 living with them, 49.3% were married couples living together, 11.5% had a female householder with no husband present, and 35.1% were non-families. 25.7% of all households were made up of individuals and 5.4% had someone living alone who was 65 years of age or older. The average household size was 2.36 and the average family size was 2.85.

All content from Kiddle encyclopedia articles (including the article images and facts) can be freely used under Attribution-ShareAlike license, unless stated otherwise. Cite this article:
Lyons, Colorado Facts for Kids. Kiddle Encyclopedia.