Mansfield is a suburban city located mostly in Tarrant county, with small parts in Ellis and Johnson counties in the U.S. state of Texas. It is part of the Dallas-Fort Worth Metroplex area. Its location is almost equidistant to Dallas, Fort Worth and DFW Airport. As of the 2010 census, the population was 56,368, up from 28,031 in 2000. The estimated population in 2014 was 62,246.

The first wave of European settlers arrived in the rolling Cross Timbers country of north central Texas in the 1840s. Primarily of Scotch-Irish origins, these pioneer farmers came for the most part from southern states, following the frontier as it shifted west of the Mississippi. They entered an area where Native Americans had been living for thousands of years. The Comanche posed a serious threat to the settlers, and in 1849, the U.S. Army established Fort Worth to protect the farms along the sparsely populated frontier.

The area southeast of the fort (and of the Trinity River) was well protected and presumably fairly well settled by the early 1850s. In one well-documented case, eight related families migrated to the area in 1853 from Illinois. Three of the four Gibson brothers in this group established homesteads about 4 miles (6 km) northwest of present-day Mansfield. This settlement, which became known as the Gibson Community, included a school and a church building by 1860.

When R.S. Man and Julian Feild arrived around 1856 and built a grist mill at the crossroads that was to become the center of Mansfield, the beginnings of the community probably existed in the oak groves bordering Walnut Creek (originally called Cedar Bluff Creek). The Walnut Creek Congregation of the Cumberland Presbyterian Church had organized itself in 1854. Members met in each other's homes, so it is suspected that there was a cluster of houses in the area.

In 1856, Julian Feild purchased 540 acres (2.2 km2) in the Mansfield area. Man and Feild completed their three-story brick grist mill sometime between 1856 and 1859. The mill, which produced flour and meal, was the first built in North Texas to utilize steam power and enjoyed patronage as far south as San Antonio and as far north as Oklahoma. The location of the mill in southeastern Tarrant County perhaps reflects the advanced state of wheat cultivation in the area and the ready availability of wood to feed the mill's steam boilers.

Feild opened a general merchandise store at the same time as the mill, located across Broad Street. He built a log house for his family, which also served as an inn for travelers and customers. By 1860, the nucleus of the future city existed. The first post office was established that year, with Julian Feild as postmaster.

During the American Civil War, the Man and Feild Mill supplied meal and flour to the Confederate States Army, hauling it to Shreveport, Louisiana, and Jefferson City, Missouri. As was common practice, the owners tithed ten percent of the mill's production to the Confederacy. The small community around the mill was unique in Tarrant County in that it prospered throughout the Civil War. "Feild's Freighters", assembled in ox-drawn wagon trains, went as far as Fort Sill, Oklahoma, where a part of the Indian Wars raged in the southern plains in the late 1860s and 1870s.

The prospering community which had grown up around the Man and Feild mill took on the name of "Mansfeild", a combination of the names of the founders. Repeated misspellings over the years resulted in the acceptance of the conventional spelling of "Mansfield." The town incorporated in 1909, continuing to be a hub for the surrounding farmland. 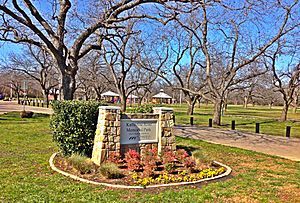 Katherine Rose Park and its pecan groves in late winter

Established in 1917, Farr Best Theater is the city's historical venue for concerts, musical revue and live performances. Even though the owners of the theater have changed hands many times since its inception, the Farr family still resides in Mansfield.

The Mansfield Historical Museum chronicles the city's history from a prairie outpost in the past to a thriving community now.

Hawaiian Falls Water Park is a 10 acres (4.0 ha) destination during the hot summer months; while Historic Mansfield is being revitalized to be a year-round destination. Downtown hosts annual festivals such as the Hot Beats and Cold Brews Festival, the Hometown Holiday Parade and St. Paddy's Pickle Parade.

All content from Kiddle encyclopedia articles (including the article images and facts) can be freely used under Attribution-ShareAlike license, unless stated otherwise. Cite this article:
Mansfield, Texas Facts for Kids. Kiddle Encyclopedia.