Zakharova was born to a family of diplomats. Her father, Vladimir Zakharov, moved the family to Beijing in 1981 when he was appointed to Soviet embassy there. The family left Beijing in 1991 when the Soviet Union collapsed and returned to Russia in 1993. Her mother, Irina, is an art historian who has worked at Moscow's Pushkin Museum. In 1998, Maria Zakharova graduated from the Faculty of International Journalism at MGIMO in the field of orientalism and journalism. Her pre-diploma apprenticeship was carried out at the Russian Embassy in Beijing. 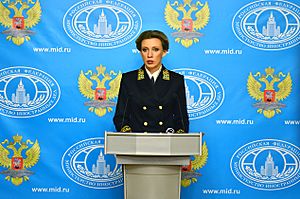 Zakharova during a Foreign Ministry briefing in February 2016

Zakharova is known for her participation in political talk shows on Russian television and for contributing commentary on sensitive political issues in social networks. She is one of the most quoted Russian diplomats. She is often opposed to Jen Psaki (the official representative of the US State Department before 31 March 2015). 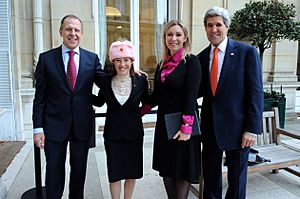 On 10 August 2015, by order of the Ministry of Foreign Affairs, Zakharova was appointed director of the Information and Press Department. Zakharova became the first woman in the history of the department to hold this post.

In 2017, Zakharova accused the European Union of hypocrisy over its different behaviour towards the separatist crises in Crimea and Catalonia, after hundreds were injured by Spanish security forces preventing Catalans from voting during the Catalan independence referendum, saying "I see and read what is happening in Catalonia. And Europe will say something to us about the referendum in Crimea and the protection of human rights". 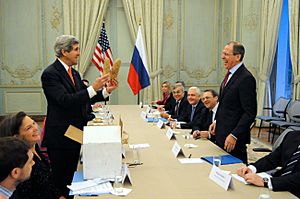 Zakharova with Lavrov, Kerry and Victoria Nuland in January 2014

In 2021, Zakharova criticised a massive NATO military exercise called Defender-Europe 21, one of the largest NATO-led military exercises in Europe in decades, which began in March 2021. It included "nearly simultaneous operations across more than 30 training areas" in Estonia, Bulgaria, Romania and other countries. She claimed that by conducting these exercises, NATO is gathering a "strike fist" near Russia's borders. On 15 April 2021, she stated that in 2021 alone "NATO is planning seven military exercises in Ukraine. The active phase of the Defender Europe 2021 exercise, the most extensive exercise for many years, is to commence near Ukraine soon."

On 7 November 2005, Zakharova married Andrei Makarov at the Russian Consulate in New York City. They have a daughter Maryana, born in August 2010.

All content from Kiddle encyclopedia articles (including the article images and facts) can be freely used under Attribution-ShareAlike license, unless stated otherwise. Cite this article:
Maria Zakharova Facts for Kids. Kiddle Encyclopedia.