Marine City is a city in St. Clair County in the U.S. state of Michigan. Located on the west bank of the St. Clair River, it is one of the cities in the River District north of Detroit and south of Lake Huron. In the late 19th century, it was a major center of wooden shipbuilding and lumber processing.

The population was 4,248 at the 2010 census. The city formerly featured an international auto ferry service, The Bluewater Ferry to Sombra, Ontario, Canada across the river. 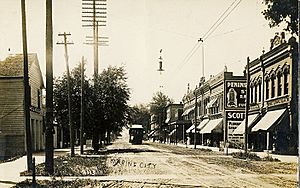 The area of Marine City had been Ojibwa territory for centuries before the first European contact. French trappers and missionaries settled in Detroit and nearby areas during the colonial period. They developed plots in the typical rectangular shape of colonial French, with the narrow end along the riverfront. The first Catholic Church was built by French Catholics at Catholic Point, where they had bought land before the United States was formed.

It was not until after the American Revolution that European-American settlers arrived in any number. In the 1780s they obtained a deed for land from the Chippewa Indians. The Americans called the community "Yankee Point", because so many settlers came from the Northern Tier of states, with late 18th and 19th century migration originating from New England. They also called the settlement "Belle River", later the name of a neighborhood.

The village was platted as Newport in 1835-37. Although never incorporated by that name, it was known as "Newport" for 31 years. In 1865, it was incorporated as the Village of Marine City. Thriving on lumber and shipbuilding, the village re-incorporated as a city in June 1887.

The second half of the 19th century was the period of great growth in the village, with many workers employed in the lumber and shipping industries. Rafts of lumber filled the St. Clair River in the spring to be worked at Marine City or Detroit. Shipyards built some of the many ships that crossed the Great Lakes. Lake steamers linked passengers with small towns around the lakes. Their decks were full and their flags were flying. Marine City was centered on a park by the river, where bands played in the bandstand at City Hall during the summer.

As the lumber business ran down, the area became linked to other resource extraction. Ships carried iron from Duluth, Minnesota, which had been mined in the Mesabi Range, to Ashtabula, Ohio for steel, passing through the Soo Locks at Sault Ste. Marie, Michigan. Marine City was where the captains of lake ships lived. Many worked for the Pittsburgh Steamship Company, piloting iron ore ships from Duluth, Minnesota to Ashtabula and other ports.

In the 21st century, Marine City has become the home of ten antique stores, including the "Water Street Antique Mall" located at 412 S Water Street. The Snug Theater is a 98-seat theater featuring live performances. It will be joined in 2014/15 by a sister theater, The Riverbank Theater, in a former bank building (originally Marine Bank & Trust) down the street. Also joining the two acting theaters is the old Mariner Theatre which serves as a special event center, Movie theatre, gallery for Fine Art Models and the home of the World famous builders model for Titanic. The antique shops and theaters are joined by restaurants and retail, catering to visitors as well as residents.

There were 1,765 households, of which 31.1% had children under the age of 18 living with them, 44.6% were married couples living together, 13.3% had a female householder with no husband present, 5.4% had a male householder with no wife present, and 36.7% were non-families. 31.3% of all households were made up of individuals, and 14% had someone living alone who was 65 years of age or older. The average household size was 2.41 and the average family size was 3.00.

All content from Kiddle encyclopedia articles (including the article images and facts) can be freely used under Attribution-ShareAlike license, unless stated otherwise. Cite this article:
Marine City, Michigan Facts for Kids. Kiddle Encyclopedia.