Kids Encyclopedia Facts
Not to be confused with Marion County, Alabama.

Marion is a city in, and the county seat of, Perry County, Alabama, United States. As of the 2010 census, the population of the city is 3,686, up 4.8% over 2000. First known as Muckle Ridge, the city was renamed after a hero of the American Revolution, Francis Marion.

Marion is the 152th most populous city in the state of Alabama, of 573 cities.

Formerly the territory of the Creek Indians, it was founded shortly after 1819 as Muckle Ridge. The city was renamed in honor of Francis Marion, the "Swamp Fox," hero of the American Revolutionary War, in 1822. It incorporated as a town the same year and also became the second county seat after the hamlet of Perry Ridge was unsuitable. In 1829, it upgraded from a town to a city. From the very early days, Marion created considerable history for a small town on the western frontier of Alabama. The old City Hall (1832) is but one of many antebellum public buildings, churches, and homes in the city today.

General Sam Houston, while between terms as 1st and 3rd President of the Republic of Texas, married Margaret Lea of Marion in the city in 1840.

At the 1844 meeting of the Alabama Baptist State Convention in Marion, the "Alabama Resolutions" were passed. This was one of the factors that led to the 1845 formation of the Southern Baptist Convention in Augusta, Georgia.

In December 1857, Andrew Barry Moore (1807-1873) of Marion was elected the sixteenth Governor of Alabama (1857-1861). After serving one term where he presided over Alabama's secession from the Union, he assisted in the war effort, was imprisoned a short time after the war and in ill health returned to Marion where he died eight years later. George Doherty Johnson (May 30, 1832 – December 8, 1910) served as mayor of Marion in 1856, state legislator from 1857-58 and rose to the rank of brigadier general in the Confederate States Army in the American Civil War.

Leading up to the Civil War Nicola Marschall (1829-1917), a German-American artist, is generally credited with designing both the first official Confederate flag and the grey Confederate army uniform while a teacher at the old Marion Female Seminary. With the coming Civil War in 1861, Nicola Marschall was approached in February by Mary Clay Lockett, wife of prominent attorney Napoleon Lockett of Marion, and her daughter, Fannie Lockett Moore, daughter-in-law of Alabama Governor Andrew B. Moore of Marion, to design a flag for the new Confederacy. Marschall offered three designs, one of which became the “Stars and Bars,” the first official flag of the Confederate States of America (C.S.A.), and which was first raised in Montgomery, Alabama, on March 4, 1861.

Hal Kemp, a jazz alto saxophonist, clarinetist, bandleader, composer, and arranger. was born in Marion in 1904 and died in Madera, California, following an auto accident in 1940. His major recordings were "There's a Small Hotel", "Where or When", "This Year's Kisses", "When I'm With You", "Got a Date With an Angel" and "Three Little Fishies". His band was very popular from 1934 until 1939. In 1936, he was number one for two weeks with "There's a Small Hotel" and two weeks with "When I'm With You". In 1937, his number one hits were "This Year's Kisses", which was number one for four weeks, and "Where or When", which was number one for one week. In 1992, Hal Kemp was inducted into the Big Band and Jazz Hall of Fame.

Coretta Scott King, wife of Rev. Dr. Martin Luther King, Jr., was born in Marion in 1927 and spent her childhood there. She graduating from Lincoln Normal School as valedictorian in 1945. The couple was married on the front lawn of her mother's home north of Marion in 1953.

A number of significant events occurred in Marion relating to the Civil Rights Movement. In 1958 Jimmy Wilson, a black man, was sentenced to death by a jury in Marion for stealing $1.95 from Estelle Barker. Wilson's case became an international cause célèbre, covered in newspapers worldwide and inspiring over 1000 letters per day to the office of governor Jim Folsom. Finally, after the Alabama Supreme Court upheld Wilson's conviction, at the urging of the Congress of Racial Equality, Secretary of State John Foster Dulles wrote to Folsom explaining the damage that the case was doing to the international reputation of the United States and Folsom quickly granted Wilson clemency.

In 1964, Marion was a center of civil rights protests in Alabama. During a Southern Christian Leadership Conference march on the evening of February 18, 1965, during the height of the Selma Voting Rights Movement, Marion resident Jimmie Lee Jackson was shot and killed by Alabama State Trooper James Bonard Fowler. These events were depicted in the movie Selma, released in 2014. . Jackson died on February 26 of an infection stemming from the wounds at nearby Good Samaritan Hospital in Selma. Martin Luther King preached a sermon at Jackson's funeral on March 3, and Jackson's death is recognized as the catalyst for SCLC Director of Direct Action, James Bevel, to call and organize the first Selma to Montgomery March on March 7. It was not until 2007, that Fowler was indicted for murder for his role in Jackson's death. In 2010, Fowler pleaded guilty to a lesser charge of manslaughter.

In 2009, Marion made national news when a three-year-old family feud turned into a 150-person riot outside the town's city hall, resulting in the arrest of eight people and the hospitalization of two.

In early 2016, the New York Times reported the city was the center of an outbreak of tuberculosis. In 2014-15 twenty people in the area had contracted active cases of the disease and three had died. 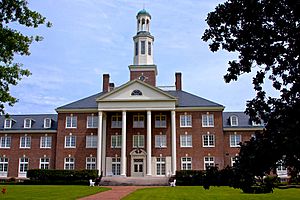 There were 1,184 households out of which 31.4% had children under the age of 18 living with them, 38.8% were married couples living together, 25.3% had a female householder with no husband present, and 30.8% were non-families. 28.9% of all households were made up of individuals and 12.6% had someone living alone who was 65 years of age or older. The average household size was 2.57 and the average family size was 3.17.

All content from Kiddle encyclopedia articles (including the article images and facts) can be freely used under Attribution-ShareAlike license, unless stated otherwise. Cite this article:
Marion, Alabama Facts for Kids. Kiddle Encyclopedia.