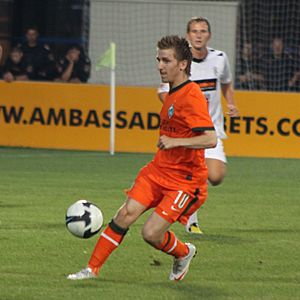 At the age of two he and his parents came to Germany. There he started playing football in his local club SG 01 Hoechst and then with Eintracht Frankfurt. In 2006 he went to the Borussia Mönchengladbach youth academy. 2007 he signed his first professional contract with Gladbach. His debut in the first squad was on 31 March 2007 against Eintracht Frankfurt. On 24 June 2009 he was sold for € 8.5 million from Borussia Mönchengladbach to Werder Bremen.

Because he never was contacted by the Bosnian association he decided to play for Germany. He played for the German U21 squad and 26matches for the National football team. He was part of the 2010 FIFA World Cup squad. He came in two times as substitute.

The Fritz Walter medal is presented by the DFB to the three best youth players of Germany.

All content from Kiddle encyclopedia articles (including the article images and facts) can be freely used under Attribution-ShareAlike license, unless stated otherwise. Cite this article:
Marko Marin Facts for Kids. Kiddle Encyclopedia.