Martin Litchfield West, OM, FBA (23 September 1937 – 13 July 2015) was a British philologist and classical scholar. In recognition of his contribution to scholarship, he was awarded the Order of Merit in 2014.

West wrote on ancient Greek music, Greek tragedy, Greek lyric poetry, the relations between Greece and the ancient Near East, and the connection between shamanism and early ancient Greek religion, including the Orphic tradition. This work stems from material in Akkadian, Phoenician, Hebrew, Hittite, and Ugaritic, as well as Greek and Latin. West also studied the reconstitution of Indo-European mythology and poetry and its influence on Ancient Greece, notably in the 2012 book Indo-European Poetry and Myth.

Martin Litchfield West was born on 23 September 1937 at Eltham General Hospital (Eltham, London), the first and only child of Catherine (née Baker Stainthorpe) and Maurice Charles West, a civil engineer. His parents lived at that time in Orpington, but moved in 1939 to Hampton, where his father was appointed resident engineer at the Metropolitan Water Board-operated waterworks. West father's family were from the Home Counties, and his mother's family from Yorkshire and Durham. His paternal grandfather, Robert West, lectured in electrical engineering; his maternal grandfather, John Stainthorpe, was a railwayman from Pickering. Litchfield was the maiden name of his paternal grandmother.

At the age of 4, West entered the private preparatory school of Denmead. At 11, he lost a scholarship at Colet Court (now St Paul's Juniors), but was offered a feepaying place instead. West discovered at Colet his interest in languages and invented at 14 a competitor of Esperanto he labelled 'Unilingua'. In 1951, he won a scholarship to the main school, St Paul's. Excelling at both linguistics and mathematics, he was advanced to the 'Upper Eighth' and sat for a scholarship to Balliol College a year early. His tutors included Donald Russell, Michael Stokes and Russell Meiggs. Among his peers were future Nobel Prize winner Anthony J. Leggett, and future Permanent Secretary Peter Gregson. 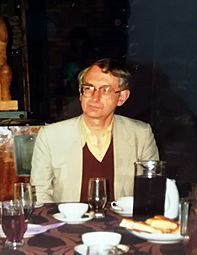 West on a visit to Estonia in September 1996

West married fellow scholar Stephanie Pickard in 1960 at Nottingham, after meeting her at a lecture given by Eduard Fraenkel at Corpus Christi College, Oxford. He became a junior research fellow at St John's College from 1960 to 1963. His doctoral thesis, a commentary on Hesiod's Theogony, won the Conington Prize for the best classical dissertation of the year in 1965, and was edited as a printed book the following year.

From the mid-sixties, West took especial interest in the relation of Greek literature to the Orient, and over several decades, culminating in his masterpiece The East Face of Helicon (1997), defended his view that Greek literature derives significant influences and inspiration from Near Eastern literature. He took up a position as tutorial fellow at University College, a position he filled from 1963 to 1974. In 1973 he became the second youngest person to be elected a Fellow of the British Academy, at the age of 35. He obtained a chair at Royal Holloway and Bedford New College, which he held from 1974 until 1991, when he became a fellow of All Souls College. West retired formally in 2004, but remained active in All Souls until the end of his life.

West died of a heart attack in 2015 in Oxford at the age of 77. Fellow Oxford academic Armand D'Angour paid tribute to him as "a man of few words in seven languages."

West edited and commented Hesiod's Theogony and Works and Days. In 1967, he published with Reinhold Merkelbach Fragmenta Hesiodea, an edition containing other fragmentary poems attributed to Hesiod. He also edited a book on the fragments of the Hesiodic Catalogue of Women. West edited Homer's Iliad and Odyssey for the prestigious Bibliotheca Teubneriana, and the Homeric Hymns for the Loeb Classical Library.

West was a DPhil and DLitt of Oxford University, and was elected a Fellow of the British Academy, a Corresponding Member of the Akademie der Wissenschaften, Göttingen, and a Member of the Academia Europaea, London. He was elected to the American Philosophical Society in 2010. HM The Queen appointed him a Member of the Order of Merit (OM) in the 2014 New Year Honours.

All content from Kiddle encyclopedia articles (including the article images and facts) can be freely used under Attribution-ShareAlike license, unless stated otherwise. Cite this article:
Martin Litchfield West Facts for Kids. Kiddle Encyclopedia.