Maryland is a location in east London, England. It forms the northeastern part of Stratford in the London Borough of Newham. The area borders Leytonstone to the north, Stratford New Town to the west and Forest Gate to the east, with the centre of Stratford to the south-west. 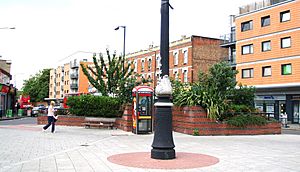 Maryland's earliest known recorded appearance is on a map of Essex published by J. Oliver in 1696, where it is marked as 'Maryland Point'. The name originated with a rich local merchant who bought land and built in the area having returned from the American colony of Maryland (itself named for Queen Henrietta Maria, wife of Charles I). London's Maryland is therefore an unusual example of a place in Britain named after an American location, rather than vice versa.

Various attempts have been made to identify the merchant. The most likely candidate seems to be Richard Lee (1617-1664, great-great-grandfather of Confederate General Robert E. Lee), who emigrated to Virginia around 1640. His estate there included land on the Maryland side of the Potomac River, near a place known as Maryland Point (later to be the site of the Maryland Point Light). On returning to England in 1658, Lee bought land in Stratford, and in 1662 was recorded as owning a large house there. 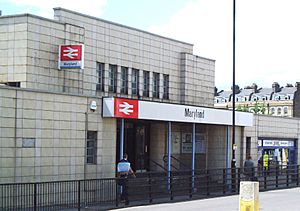 All content from Kiddle encyclopedia articles (including the article images and facts) can be freely used under Attribution-ShareAlike license, unless stated otherwise. Cite this article:
Maryland, London Facts for Kids. Kiddle Encyclopedia.