Songs such as the "Mi Mala" remix featuring Karol G, Becky G, Leslie Grace and Lali (which peaked at No. 44 on the Hot Latin Songs), have catapulted onto the Latin Urban Pop charts.

The duo has released an EP, Arte, on Sony Music Latin, and an album Para Aventuras y Curiosidades, which peaked at No. 3 on Billboard's Latin Pop.

They were nominated for the 2017 Latin Grammy Award for Best New Artist and Song of the Year and chosen by YouTube Music as the only Latin Artist to be part of "Artist on the Rise" in 2019.

Mauricio Alberto and Ricardo Andrés Reglero Rodriguez were born in Caracas, Venezuela, to the filmmaker Marlene Rodríguez, and Ricardo Montaner, an Argentine-born Venezuelan singer-songwriter. They were raised until the ages of 7 and 10 in Caracas before moving to Miami, Florida. They have a sister Evaluna and two older half-brothers, Alejandro Manuel and Héctor Eduardo, from their father's first marriage. Mau y Ricky are bilingual, speaking both English and Spanish.

They began studying music at the ages of 4 and 6 years respectively and started their music career playing weekly at a church in a band that they co-founded. In 2011 they began performing as MR until 2015, when they changed the name of the duo to Mau & Ricky. 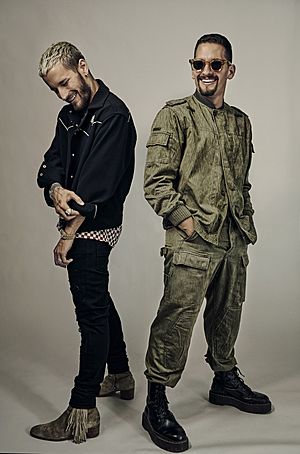 Mau & Ricky during a photo session

In 2017, they released "Arte", their first EP under the umbrella of Sony Music Latin.

In May 2019, they released their album "Para Aventuras y Curiosidades" which has peaked at No. 3 on Billboard's Latin Pop charts and stayed on the Billboard charts for 39 weeks straight. The album has received multiple diamond and platinum records in the US and has been in numerous other Billboard Charts. The album got a finalist position for the 2020 Billboard Latin Music Awards in Latin Pop Album of the Year category.

In January 2020, Mau y Ricky were featured in 3 singles (Thalía "Ya Tú Me Conoces", Tini "Recuerdo" and Ovy on the Drums "Sigo Buscándote").

In 2019 they were chosen by Youtube Music as the only Latin Artist to be part of "Artist On The Rise" in 2019. 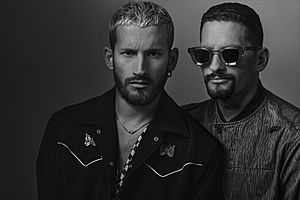 Mau & Ricky during a photo session

Mau and Ricky both live in Miami.

All content from Kiddle encyclopedia articles (including the article images and facts) can be freely used under Attribution-ShareAlike license, unless stated otherwise. Cite this article:
Mau y Ricky Facts for Kids. Kiddle Encyclopedia.