People who practice medicine are most often called medical doctors or physicians. Often doctors work closely with nurses and many other types of health care professionals.

Many doctors specialize in one kind of medical work. For example, pediatrics is the medical specialty about the health of children. 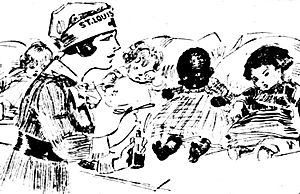 February 1918 drawing by Marguerite Martyn of a visiting nurse in St. Louis, Missouri, with medicine and babies

The scope and sciences underpinning human medicine overlap many other fields. Dentistry, while considered by some a separate discipline from medicine, is a medical field.

A patient admitted to the hospital is usually under the care of a specific team based on their main presenting problem, e.g., the cardiology team, who then may interact with other specialties, e.g., surgical, radiology, to help diagnose or treat the main problem or any subsequent complications/developments.

The main branches of medicine are: 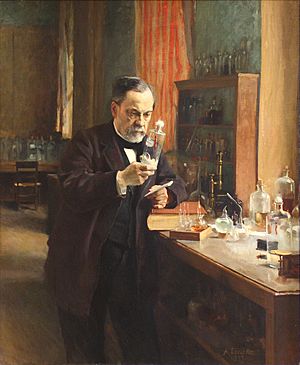 Louis Pasteur, as portrayed in his laboratory, 1885 by Albert Edelfelt

In the broadest meaning of "medicine", there are many different specialties. In the UK, most specialities have their own body or college, which have its own entrance examination. These are collectively known as the Royal Colleges, although not all currently use the term "Royal". The development of a speciality is often driven by new technology (such as the development of effective anaesthetics) or ways of working (such as emergency departments); the new specialty leads to the formation of a unifying body of doctors and the prestige of administering their own examination. 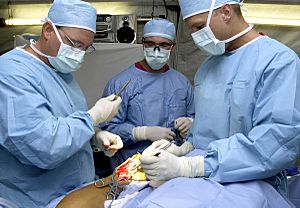 Surgeons in an operating room

Surgery is an ancient medical specialty that uses operative manual and instrumental techniques on a patient to investigate or treat a pathological condition such as disease or injury, to help improve bodily function or appearance or to repair unwanted ruptured areas (for example, a perforated ear drum). Surgeons must also manage pre-operative, post-operative, and potential surgical candidates on the hospital wards. Surgery has many sub-specialties, including general surgery, ophthalmic surgery, cardiovascular surgery, colorectal surgery, neurosurgery, oral and maxillofacial surgery, oncologic surgery, orthopedic surgery, otolaryngology, plastic surgery, podiatric surgery, transplant surgery, trauma surgery, urology, vascular surgery, and pediatric surgery. In some centers, anesthesiology is part of the division of surgery (for historical and logistical reasons), although it is not a surgical discipline. Other medical specialties may employ surgical procedures, such as ophthalmology and dermatology, but are not considered surgical sub-specialties per se.

Surgical training in the U.S. requires a minimum of five years of residency after medical school. Sub-specialties of surgery often require seven or more years. In addition, fellowships can last an additional one to three years. Because post-residency fellowships can be competitive, many trainees devote two additional years to research. Thus in some cases surgical training will not finish until more than a decade after medical school. Furthermore, surgical training can be very difficult and time-consuming.

Internal medicine is the medical specialty dealing with the prevention, diagnosis, and treatment of adult diseases. According to some sources, an emphasis on internal structures is implied. In North America, specialists in internal medicine are commonly called "internists." Elsewhere, especially in Commonwealth nations, such specialists are often called physicians. These terms, internist or physician (in the narrow sense, common outside North America), generally exclude practitioners of gynecology and obstetrics, pathology, psychiatry, and especially surgery and its subspecialities.

Because their patients are often seriously ill or require complex investigations, internists do much of their work in hospitals. Formerly, many internists were not subspecialized; such general physicians would see any complex nonsurgical problem; this style of practice has become much less common. In modern urban practice, most internists are subspecialists: that is, they generally limit their medical practice to problems of one organ system or to one particular area of medical knowledge. For example, gastroenterologists and nephrologists specialize respectively in diseases of the gut and the kidneys.

In the Commonwealth of Nations and some other countries, specialist pediatricians and geriatricians are also described as specialist physicians (or internists) who have subspecialized by age of patient rather than by organ system. Elsewhere, especially in North America, general pediatrics is often a form of primary care.

There are many subspecialities (or subdisciplines) of internal medicine:

Training in internal medicine (as opposed to surgical training), varies considerably across the world: see the articles on medical education and physician for more details. In North America, it requires at least three years of residency training after medical school, which can then be followed by a one- to three-year fellowship in the subspecialties listed above. In general, resident work hours in medicine are less than those in surgery, averaging about 60 hours per week in the US. This difference does not apply in the UK where all doctors are now required by law to work less than 48 hours per week on average.

The following are some major medical specialties that do not directly fit into any of the above-mentioned groups:

All content from Kiddle encyclopedia articles (including the article images and facts) can be freely used under Attribution-ShareAlike license, unless stated otherwise. Cite this article:
Medicine Facts for Kids. Kiddle Encyclopedia.