Mekosuchus is a genus of extinct Australasian crocodiles within the subfamily Mekosuchinae. They are believed to have been made extinct by the arrival of humans on the South Pacific islands where they lived. The species of this genus were small in size, 2 m in maximum length, and terrestrial, making them the last surviving group of fully terrestrial crocodilians, leaving only semi-terrestrial species such as the Cuban crocodile and the dwarves Osteolaemus and Paleosuchus. 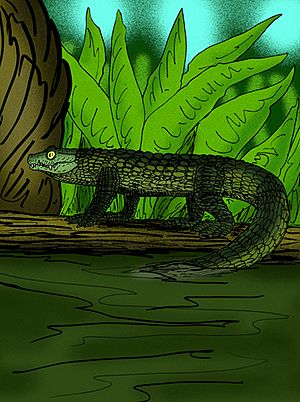 There are currently four species of Mekosuchus recognised. The first discovered (and youngest) is the type species M. inexpectatus from the Holocene of New Caledonia which became extinct at some point in the last 4,000 years (with the arrival of man). The poor soils of New Caledonia restrict large ground-dwelling prey, so Mekosuchus had specialized back teeth for cracking mollusk shells and arthropod carapaces, though it probably also went after lizards and various-sized birds when given the opportunity.

Another Holocene species is known, M. kalpokasi which lived on the island of Éfaté, Vanuatu approximately 3,000 years ago (again disappearing with the arrival of man).

M. whitehunterensis, the oldest known species, lived during the late Oligocene in Queensland, Australia. M. sanderi also lived in Queensland but later, during the Miocene.

All content from Kiddle encyclopedia articles (including the article images and facts) can be freely used under Attribution-ShareAlike license, unless stated otherwise. Cite this article:
Mekosuchus Facts for Kids. Kiddle Encyclopedia.