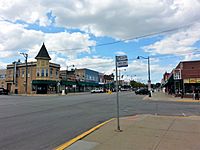 Melrose Park is a village in Cook County, Illinois, United States. It is a suburb of Chicago, 14 miles by road. As of the 2010 census it had a population of 25,411.

The suburb was the home of Kiddieland Amusement Park from 1929 until 2010 (it closed in September 2009 before it was demolished), the Shrine of Our Lady of Mt. Carmel, and Stern Pinball, Inc., which is now the world's last manufacturer of coin-operated pinball machines.

All content from Kiddle encyclopedia articles (including the article images and facts) can be freely used under Attribution-ShareAlike license, unless stated otherwise. Cite this article:
Melrose Park, Illinois Facts for Kids. Kiddle Encyclopedia.