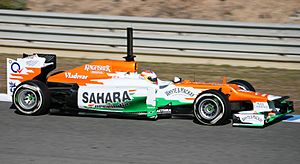 Ilmor was founded by Mario Illien and Paul Morgan in 1983, as an independent British Formula One engine manufacturer. The company name was taken from the last names of the founders. It originally started building engines for IndyCars. They received financial support from IndyCar team owner and builder Roger Penske. 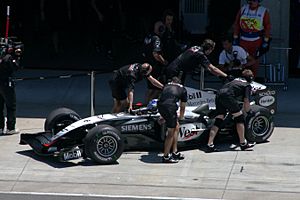 In 1991 Ilmor entered Formula One as an engine supplier. They supplied engines to the Leyton House team. Leyton House was formerly known as March. In 1992, Leyton House changed its name back to March and continued using Ilmor engines.

Ilmor also supplied engines to the Tyrrell team in 1992. Powered by an Ilmor V10, Tyrrell scored 8 points, and March 3 points in the Formula One Championship.

Ilmor had developed a good name in F1. When the Sauber sportscar-team and Mercedes-Benz were planning to enter Formula One together, they made a deal with Ilmor. However, Ilmor deceided not to put the slogan "Concept by Mercedes-Benz" on the engines. Since the engines were officially called Ilmor, Mercedes backed out of the project with Ilmor.

After an unexpectedly fast performance in 1993, Sauber convinced Mercedes to join officially in 1994. In 1994 Ilmor also supplied the new Pacific GP team of Keith Wiggins with the old 1993 version of the engines. Pacific only managed to qualify seven times in thirty-two tries. The Ilmor engine was not the cause of this poor performance.

In 2001 Paul Morgan was killed while landing his vintage (antique) plane at Sywell Aerodrome, Northamptonshire. This led to Mercedes-Benz increasing their financial involvement in Ilmor, and renamed the company Mercedes-Ilmor Ltd.

All content from Kiddle encyclopedia articles (including the article images and facts) can be freely used under Attribution-ShareAlike license, unless stated otherwise. Cite this article:
Mercedes-Benz HighPerformanceEngines Facts for Kids. Kiddle Encyclopedia.