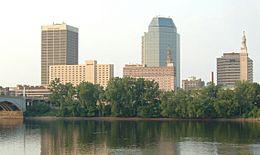 Metro Center is the original colonial settlement of Springfield, Massachusetts, located beside a bend in the Connecticut River. As of 2019, Metro Center features a majority of Western Massachusetts' most important cultural, business, and civic venues. Metro Center includes Springfield's Central Business District, its Club Quarter, its government center, its convention headquarters, and in recent years, it has become an increasingly popular residential district, especially among young professionals, empty-nesters, and creative types, with a population of approximately 7,000 (2010.)

Metro Center is physically separated from the Connecticut River by Interstate 91 – a 1958 urban renewal project that separated the city from its riverfront.

Metro Center, founded in 1636 by William Pynchon and a group of pioneers, was originally called Agawam Plantation. At the time of its founding, Agawam Plantation was the northernmost settlement on the Connecticut River, and belonged to the Connecticut Colony as opposed to the Massachusetts Bay Colony, to which it would later belong. Within less than a decade after its founding in 1636, differences arose between the leaders of Agawam (Springfield) and Newtown (Hartford) over how to treat the region's Native population. Springfield hoped to pursue peaceful relations with the Natives so as to better facilitate trade and communal farming, whereas Hartford – and many of Connecticut's early settlers – had fought the bloody Pequot War to claim their territory, and thus took a more skeptical view of the Native population. This difference of opinion led to Agawam (Springfield) annexing itself to Massachusetts in 1640. At that time, William Pynchon was named magistrate of the settlement, and the town's name was changed to Springfield in Pynchon's honor. (Pynchon was from Springfield, Essex.)

In 1813, the green in the middle of Metro Center was officially named Court Square. Court Square had been the center of public and social life since the times when Native Americans roamed freely through Springfield's streets (pre-King Philip's War,) and continued to be so until the building of Springfield's first train station in the 1830s.

The arrival of the railroad to Springfield in the 1830s brought great wealth to the city, again, due to its location. Goods from New York, Boston, Chicago, and even as far west as San Francisco travelled through Springfield on their ways to coastal distribution centers. Springfield, rather than Hartford, or Northampton, or Greenfield, became Western New England's railroad hub, perhaps due to the presence of the Springfield Armory, but more likely due to the city's growing reputation for ingenuity, and that it served as a nearly equidistant point between Albany and Boston, Providence, and New York.

Metro Center features the majority of Western Massachusetts' most important cultural institutions. For example, it features the Springfield Armory National Park, which includes a museum featuring the world's largest historic firearm collection. A block west of the Armory is the Quadrangle, which includes an extraordinary grouping of world-class and regional museums, each with a different focus. The Quadrangle features the George Walter Vincent Smith Museum, which is known worldwide for having the largest collection of Chinese cloisonné outside of China. It also features the Museum of Fine Arts, which features a particularly strong European Impressionist and Post-Impressionist collection, including paintings by Monet, Degas, and Gauguin, among others. The American Collection features works by Springfielder James McNeill Whistler. The Springfield Science Museum features the first-ever American planetarium (built 1937,) Dinosaur Hall, and a live animal center. The Quadrangle's two regional museums are the Connecticut River Valley History Museum, the most extensive compilation of information on the historic valley and its people; and the new Wood Museum of Springfield History, which showcases Springfield as The City of Firsts in the context of American History.

Within close walking distance are Rascal's, a comedy club at 1 Monarch Place, and Springfield's famous City Stage playhouse – a tiny modern playhouse that produces a range of works from philosophical modern plays, to Shakespeare, to children's entertainment. If you plan an excursion to City Stage, it is best to check ahead to see if what's showing meets your tastes.

The area surrounding Stearns Square has been Springfield' Club Quarter for over 120 years. As of 2011, Springfield's Club Quarter continues to expand, now featuring over 70 clubs, bars, restaurants, and even historic gathering places. For an example of the latter, the Duryea brothers built the first American gasoline-powered car at a still existent building on Taylor Street – one of the few buildings in the district at that time, which was not a bar or club. An 1893 model Duryea stands in a small park outside of what is today Alumni Club at 90 Worthington Street, mere feet from the historically important Duryea shop. Springfield's most popular bars and clubs are an eclectic mix, featuring Skyplex, a three-level bar and club directly on Stearns Square; Theodore's – voted America's best blues club; Oz, one of Springfield's five LGBT clubs and bars, (not counting the numerous clubs and bars that sponsor LGBT nights;) Shekago's, a martini bar featuring live jazz and piano-playing; and Fat Cat's Bar & Grill, which features punk, industrial, and other live rock bands. In Springfield's Club Quarter, many different "scenes" co-mingle peaceably, including hip-hop, rock, LGBT, and jazz.

Even by urban New England standards, where downtowns are frequently walkable like those in Europe, Springfield's is exceptionally so. It is composed of mixed-use residential, commercial, and institutional organizations. A majority of its buildings were built in the late 1800s and early 1900s, giving it a Victorian look; however, there are numerous skyscrapers as well. Metro Center is cut off from the Connecticut Riverfront by Interstate 91, an 8-lane highway. Across Interstate 91 sits the Basketball Hall of Fame complex, Springfield's largest tourist draw.

From 1908 until 1971, Springfield was subject to a skyline height limit – imposed by the Massachusetts State Legislature – of 125 feet, and thus Springfield has a relatively lower skyline than comparable cities of its population and economic and cultural importance. This trait is now looked on as a positive by developers at the Urban Land Institute, who have written "Metro Center now stands out from its peers, most of which long ago demolished the human-scale architecture that made their downtowns livable." During Springfield's resurgence in the new millennium, prominent architects – like Moshe Safdie, who built the $57 million, 2008 U.S. Federal Court Building; Gwathmey Siegel & Associates, who built the $47 million, 2004 Basketball Hall of Fame; and TRO Jung Brannen, who are building the $110 million, 2012 adaptive reuse of Springfield's original Technical High School – adapted to Springfield's human-scale to a create monumental buildings rather than attempting to "achieve monumentalism through over-scaling," as has happened in other cities. With energy prices rising, Springfield's 1908 building height limit now seems like an idea that was far ahead of its time.

In 2012, Springfield's 1926 Union Station will receive a $75 million renovation (including $4 million pledged by Connecticut) to become an intermodal transportation center, with Peter Pan Bus' headquarters, PVTA's headquarters, and Greyhound all relocating to the new facility. This project will coincide with the start-up of Springfield's two new rail lines: the $1 billion, southbound Springfield Hartford New Haven rail line, which will reportedly reach speeds up to 110 mph, making it the United States' first true "high-speed" train; and the $80 million, northbound Knowledge Corridor Intercity Commuter Rail, which will connect Springfield with its northern neighbors along the Connecticut River (e.g. Northampton, Massachusetts) and terminate in Brattleboro, Vermont. Ultimately, this renovation of the old Montrealer line will take passengers to Montreal, Canada.

Metro Center provides quick access to I-91 and I-291, both of which connect to I-90 (the Massachusetts Turnpike), making trips to Boston, Albany, New York City, Montreal, Hartford, Worcester, and New Haven convenient by car. This convenience, however, came at a steep price to Springfielders: hasty, poor urban planning decisions during 1958 created the now elevated I-91 viaduct along the Connecticut River, which essentially cut off Springfield from the Connecticut, the parks surrounding it, and the Basketball Hall of Fame complex, preventing foot traffic and resulting in untold losses of tourist dollars among other losses. In 2010, Boston's Urban Land Institute proposed a vision for Springfield's riverfront; however, as of 2011, Interstate 91 remains a physical barrier between Springfield, the Connecticut River, and the Basketball Hall of Fame.

The position of I-91 and its blockage of the Connecticut River – along with the cement covering of the Mill River – are challenges that Springfield officials say they plan on addressing in upcoming years.

Recent academic papers have documented negative economic and sociological effects of I-91's placement in Springfield – it has fragmented three neighborhoods, inhibited the economic growth of Springfield's most valuable land – on the Riverfront and around the Basketball Hall of Fame – and essentially made the river inaccessible to people as a place for recreation and tourism. Recent city planning polls rate Springfield's I-91 among the worst urban planning decisions made by an American city. The highway's inhibiting effects on riverfront development were exacerbated during the 1980s and 1990s, when giant, above-grade highway parking lots were built underneath I-91, and later when earthen, grassy mounds and 20-foot limestone walls were constructed around large sections of it, blocking all but the tallest Metro Center buildings' views of the Connecticut River, and discouraging economic and social interaction between Metro Center and the Basketball Hall of Fame.

The Quadrangle-Mattoon Street Historic District is one of the few neighborhoods in the Knowledge Corridor that remains lined with historic, restored red-brick Victorian row houses on both sides, and shaded by tree canopies. The Mattoon Street neighborhood features some of Springfield's most prestigious residential addresses, on Mattoon Street, Salem Street, Elliot Street, and others. It also features one of renowned architect H.H. Richardson's first works in the Richardsonian Romanesque style, the current Hispanic Baptist Church. Early each Fall, the neighborhood hosts a large arts festival, "The Mattoon Street Arts Festival." 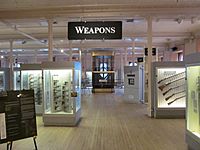 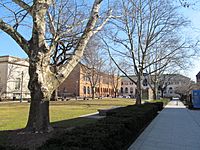 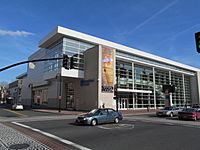 Metro Center features several 3 star and 4 star hotels, including the Springfield Marriott Hotel; the Springfield Sheraton Monarch Place Hotel; the Hilton Garden Inn Springfield; and currently under construction (as of 2011) the former Epiphany Tower on State Street across from the MassMutual Center will become a 98-bed Holiday Inn Express.

Metro Center features seven prominent parks: Court Square, the city's one constant topographical feature since its founding in 1636; Stearns Square, designed by the creative "dream-team" of Stanford White and August St. Gaudens, then as now in the heart of Springfield's Club Quarter; Tower Square Park, a green park atop a skyscraper in downtown Springfield; Center Square on Main Street, a well-landscaped park that borders the Club Quarter and Downtown Central Business District; Merrick Park, by the Quadrangle, the sole function of which is to exhibit Augustus St. Gaudens' most famous outdoor bronze sculpture, The Puritan; Pynchon Park, a modernist concrete park with trees and a distinctive elevator in the brutalist architectural style – one of the more original looking city parks in the United States, arguably; and Connecticut River Walk Park, a walkway and bikeway that was devastated by the 2011 Springfield tornado, and which previous to it, was rarely used due to Interstate 91 physically blocking Springfielders' access to it. Regardless, if one can make it there, it affords beautiful views of the river, valley, skyline, and mountains surrounding them all.

All content from Kiddle encyclopedia articles (including the article images and facts) can be freely used under Attribution-ShareAlike license, unless stated otherwise. Cite this article:
Metro Center, Springfield, Massachusetts Facts for Kids. Kiddle Encyclopedia.