As Under Secretary of Defense for Policy, Flournoy was the highest-ranking woman in the history of the Department of Defense. In that position, Flournoy crafted the Obama administration's counter-insurgency policy in Afghanistan and helped persuade President Obama to intervene militarily in Libya.

In 2007, Flournoy co-founded the Center for a New American Security. She is a co-founder and the current managing partner of WestExec Advisors.

Flournoy was born on December 14, 1960, in Los Angeles, California. Her father, George Flournoy, was a cinematographer who worked on shows including I Love Lucy and The Odd Couple. He died of a heart attack when she was 14 years old. Flournoy attended Beverly Hills High School in Beverly Hills, California. She was an exchange student in Belgium for one year, where she learned French.

Flournoy received a bachelor of arts degree in social studies from Harvard College in 1983. She received an M.Litt. in international relations in 1986 from Oxford University, where she was a Newton-Tatum scholar at Balliol College. As of 1986, she was a research analyst at the Center for Defense Information; by 1989, she worked at the Arms Control Association. From 1989 until 1993 she was at Harvard's John F. Kennedy School of Government, where she was a research fellow in its International Security Program.

While serving under the Clinton administration as a deputy assistant secretary of defense, Flournoy was the principal author of the 1997 Quadrennial Defense Review, which argued that "determined U.S. forces must be capable of fighting and winning two major theater wars nearly simultaneously".

She was a primary contributor to the 2001 Quadrennial Defense Review.

Flournoy then moved to the Center for Strategic and International Studies (CSIS), where she worked as a senior advisor on a range of defense policy and international security issues. In 2002, a year before the US invasion of Iraq, she argued for preemptive strikes by the US against foreign weapons stockpiles. Flournoy told The Washington Post, "In some cases, preemptive strikes against an adversary's [weapons of mass destruction] capabilities may be the best or only option we have to avert a catastrophic attack against the United States."

In 2007, Flournoy co-founded the Center for a New American Security (CNAS) with Kurt M. Campbell. She was named CNAS's president. Flournoy and Campbell wrote a 2007 policy paper called "The Inheritance and the Way Forward" that advocated for a US foreign policy "grounded in a common-sense pragmatism rather than ideology". 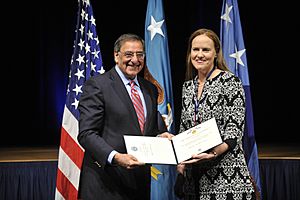 After the 2008 presidential election, Flournoy was selected as one of the review team leads for the Obama transition at the Department of Defense. On January 8, 2009, President-elect Obama announced that he was nominating her as Under Secretary of Defense for Policy, to serve under Secretary of Defense Robert Gates. When the United States Senate confirmed her nomination on February 9, 2009, she became the highest-ranking woman in the history of the Department of Defense.

In 2009, Flournoy told The New York Times that she had spent much of her adult life steeped in the practice of war. "We're trying to recognize that warfare may come in a lot of different flavors in the future," she said.

From February 2009 to February 2012, Flournoy was a principal advisor to U.S. Secretaries of Defense Robert Gates and Leon Panetta.

On December 12, 2011, Flournoy announced that she would step down in February 2012 to return to private life and contribute to President Barack Obama's re-election bid.

In 2011, Flournoy, then Under Secretary of Defense for Policy, helped persuade President Obama to intervene militarily in Libya, despite opposition from members of Congress and key White House advisors, such as Joe Biden, Vice President; Tom Donilon, National Security Advisor; and Robert Gates, Defense Secretary. Flournoy supported the NATO-led imposition of a no-fly zone over Libya to oust resistant leader Muammar Gaddafi, accused of ordering the killing of demonstrators and promising to "hunt the rebels down and show no mercy." Flournoy said imposition of a no-fly zone necessitated first destroying Libya's air defenses with US and British cruise missiles targeting the Libyan missile defense system, and US B-2 bombers attacking Libyan airfields.

In a 2013 conversation with the Council on Foreign Relations, Flournoy said she had supported US military intervention on humanitarian grounds. Critics who disagreed with Flournoy described the war on Libya as "disastrous" in its destabilization of entire regions in the Middle East and North Africa, facilitating the transfer of arms to extremists across countries. Two years after the ouster of Muammar Gaddafi, Flournoy defended the US military intervention in Libya, telling the Council on Foreign Relations: "I think we were right to do it."

At least in 2014 Flournoy sat on the board of the Atlantic Council.

In June 2016 while she was rumoured to be "Hillary Clinton's Likely Defense Secretary", Flournoy advocated regime change in Syria, supporting "limited military coercion" to remove President Bashar al-Assad from office.

In 2018, Flournoy joined the board of Booz Allen Hamilton, receiving $440,000, mostly in company stock options during the first two years since her appointment. She has received some criticism for her role as a director at Booz Allen Hamilton, including by authors affiliated with the Project on Government Oversight (POGO).

As of December 1, 2020, Flournoy was an advisor to Pine Island Capital, a private equity firm. In December 2020, Pine Island raised $218 million to pay for investments in military and aerospace and other industries. In its September 2020 S.E.C. filing, Pine Island forecast that the Defense Department "will prioritize rapid technological advancements" in artificial intelligence and other technologies.

Flournoy was in 2018 on the board of directors of Amida Technology Solutions.

Flournoy was widely speculated to be a leading contender to serve as Secretary of Defense under President Joe Biden. The subject was tarnished by liberal critics for her international consulting and private equity associations whereas her colleague, Antony Blinken was not.

During the 2020 presidential transition of Joe Biden, Flournoy had been viewed as being "at the top of Biden's list" to be Secretary of Defense. In December 2020, Gen. Lloyd Austin was reported to have been chosen instead.

In a webinar hosted by the Israel Policy Forum in June 2020, Flournoy expressed concern that Israel's proposed unilateral annexation of the West Bank could lead Congress to deny almost $4 billion in annual US aid to Israel. "I would hate to see some in Congress decided they are going to hold hostage our security assistance to Israel as a way of protesting their policies in the West Bank." Flournoy added that a fraying of the US-Israel relationship would be disastrous for US interests.

During the 2020 US presidential election, Flournoy stated that she opposed lifting economic sanctions against North Korea and Iran, though might support waivers for medical supplies during the global COVID-19 pandemic.

In an August 2020 interview with Defense News, Flournoy stated that she favored shifting money from more traditional military expenditures to unmanned systems "that dramatically improve ... our ability to project power to defend an interest or an ally who's under threat".

In November 2020, when Flournoy was under consideration for Secretary of Defense, she wrote, “the department and Congress may want to consider a new type of funding authority that supports both the development and testing of new digital technologies." The Project on Government Oversight (POGO) criticized Flournoy for using "opaque" language to skirt government oversight.

In June 2020 Flournoy argued that the US must invest in new military technologies and more long-range missiles, escalate US troop deployment to the South China Sea area, and step up roving war games in Asia to deter Chinese aggression. Without such ramped-up US military activity and absent the technology to ward off a Chinese cyber attack on US navigation systems, Flournoy asserted the US could stumble into a nuclear confrontation with China over Taiwan sovereignty.

In a November 2020 CNAS report, "Sharpening the U.S. Military Edge: Critical Steps for the Next Administration," Flournoy argued the U.S. military must be more competitive with China "to keep its military-technological edge." She called for prioritizing artificial intelligence, cyber warfare, unmanned and autonomous weapons systems.

Spencer Ackerman has described Flournoy as a centrist. Van Jackson, a former colleague, described her approach as that of a "classic liberal internationalist".

Flournoy's 2020 Asia essay was criticized by historian Andrew Bacevich, who said goading China into a high-tech arms race was not prudent when other areas, such as addressing the climate crisis and COVID-19 pandemic, demanded collaboration, not competition. Bacevitch added that Flournoy's call for increased spending on unmanned space systems rested on premises that advanced technology always wins wars and that military might equals security, saying "The immediate threats to our collective safety and well-being—perhaps even to our Republic—are ... not on the other side of the planet."

Code Pink co-founder Medea Benjamin argued in December 2020 that Flournoy would be the wrong choice for Secretary of Defense because she would "steer the American empire farther down its current path of lost wars, corrupt militarism and terminal decline".

She is a member of the Aspen Strategy Group, and the Council on Foreign Relations.

As of 2020[update], Flournoy is a member of the board of directors of Spirit of America.

Flournoy's husband, W. Scott Gould, is a retired captain who served for 26 years in the United States Navy Reserve. He was a vice president at IBM before becoming United States Deputy Secretary of Veterans Affairs. The couple has three children and reside in Bethesda, Maryland.

All content from Kiddle encyclopedia articles (including the article images and facts) can be freely used under Attribution-ShareAlike license, unless stated otherwise. Cite this article:
Michèle Flournoy Facts for Kids. Kiddle Encyclopedia.